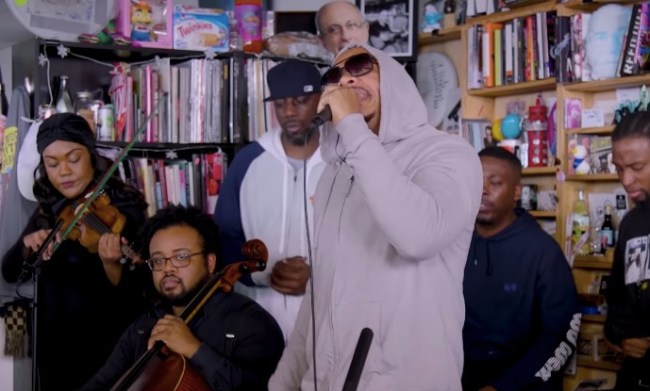 To commemorate 25 years of Wu-Tang Clan‘s Enter The Wu-Tang (36 Chambers) the group went on NPR’s Tiny Desk Concert and performed a sick medley of their hits from the past quarter century.

Damn, let that sink in. They’ve been making hits for more than a quarter of a century. My first cassette tape was Enter The Wu-Tang aka ’36 Chambers of Death’. I shit you not. I bought the cassette at the Peachtree Mall in Atlanta as a kid (not in 1993, years later) while on my way back to Florida from some Church camp in the Carolinas my parents decided to send me to that summer.

Coincidentally, I bought the Wu-Tang Forever CD at that same store a few years later even though I’m from Florida and that was probably the only two times I’ve ever been to that mall in my life.

Twenty-five years after hitting the scene, Wu-Tang Clan still got it. They threw down on this sick medley of their hits from the past 25-years on Tiny Desk Concert, a show that’s previously featured some of the biggest names in music.

The retrospective mashup of Wu classics started with the posse cut “Triumph.” Backed by strings (The Green Project), the performance morphed into an old-school cipher as Raekwon, Inspectah Deck and Cappadonna traded verses with Masta Killa and U-God. Young Dirty Bastard, son of original member Ol’ Dirty Bastard, provided a spark of energy reminiscent of his father.

At one moment in the performance, RZA — the mastermind behind the Clan’s success — omits some explicit lyrics from earlier in his Wu journey, while alluding to the #MeToo movement mid-cadence. But it’s the poetic interlude, read from his phone at the close of the set, that better reflects his current state of consciousness. “Wu-Tang is for the kids!” RZA proclaims. The core of the group began as childhood pals in Staten Island in the early ’90s, when the crew’s creative philosophy was influenced by everything from Saturday afternoon kung-fu flicks to the spiritual wisdom of the Five-Percent Nation. As they’ve matured, Raekwon still describes the Wu as “superfriends.” They’ve allowed each other to grow and form various offshoots in recent years. But when the Wu-Tang Clan comes together, they still bring a love for the culture and for their brotherhood.