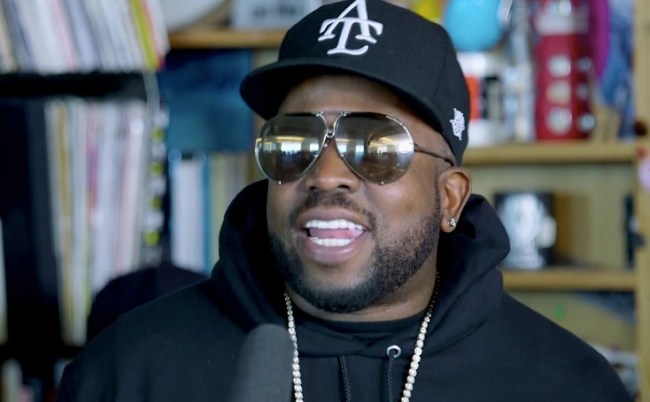 I was fortunate enough to see Big Boi perform a few years back at Austin’s now-defunct Power Plant. It was the last night of SXSW’s Tech week and Big Boi put on a private/VIP concert sponsored by Pepsi.

I actually managed to score 2 free tickets to the show by checking in on 4square at some ambulance depot while picking up my buddy from work, which was absurd, but me and that friend scored VIP tickets by pretending to be Gary Vaynerchuk’s brother AJ and his +1 and sneaking into the show with some Vayner Media people.

Big Boi puts on a hell of a show. And that should come as no surprise. With André 3000, Big Boi was on top of the planet with Outkast. Seriously, take a second to think about their discography and tell me they aren’t one of the greatest musical duos of the past 25 years: ATLiens, Aquemini, Stankonia, Speakerboxxx/The Love Below, and more.

Big Boi appeared this week on NPR‘s Tiny Desk Concert series and busted out three hits: “So Fresh, So Clean,” “All Night” and “The Way You Move.” Big Boi performed with Organized Noize’s Sleepy Brown and an 8-piece group of musicians to bust out the Outkast hits.

I’m 99% certain most of you have seen NPR’s Tiny Desk Concert footage before. They had Mac Miller on there (video of Mac Miller’s performance is below) as well as artists like T.I., Dave Matthews, George Clinton, Billy Corgan, Hanson, Wyclef Jean, and more.

I tried to find this video on YouTube but it appears as if NPR hasn’t uploaded it there yet. They’ve only shared the video from their proprietary media player thus far but I’ve embedded that below for you.

If it’s not working for whatever reason, you can access NPR’s website here but I don’t know why the video player would work for you there and not embedded above. Once they upload the YouTube version I’ll be sure to swap that in for you guys.

Here’s that footage of Mac Miller on Tiny Desk Concerts if you haven’t seen it before or just want to watch it again:

Want more? Here’s Dave Matthews’ performance on NPR from a few months ago: