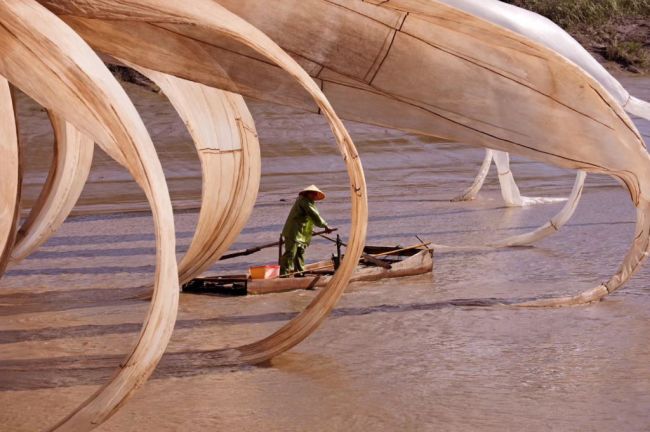 Amateur photographers are flocking to Xiapu County in southern China to capture its scenic seaside, rural landscape and working farmland. There is only one catch— it’s an illusion.

Nestled between the East and South China seas, Xiapu has long been known for its seafood. In particular, it is rich with sea cucumbers.

However, in recent years, consistent bad harvests from the sea caused the region’s economy to struggle. With a desire to revive the financial well-being of the area, local government decided to cash in on rural tourism.

Officials set out to turn Xiapu into a coastal village that it really wasn’t.

While it is still undeniably an agrarian region, it has become a tourist destination likened to Colonial Williamsburg. It shows what China might have been like during simpler times.

For a price, Chinese and foreign visitors can get the perfect photo for their social media profiles. The entire setting is staged by teams of locals who act as farmers and fishermen, and along with special effects and lighting, you’re guaranteed to get a FOMO-worthy shot.

Buses take visitors around from destination to destination and provide step-off spots for each photo. Tourists line up in a row to capture different moments.

At one stop, two middle-aged “farmers” walk back and forth through a section of hanging banyan trees, leading a water buffalo behind them. They wear traditional Chinese clothes and carry farm equipment as a manufactured “mist” engulfs their clearing and catches the sunlight. In reality, it is a small fire set off-camera.

When the two reach one end of the clearing, they turn back and do it again until everybody feels comfortable with their photos. Once the first group has gone, they rest until the next arrives.

At another station, a man rows his boat through a series of pink and green fishing nets for visual effect. He wears a traditional hat and seems in no hurry, because he isn’t.

On the other end of the camera, the tour group guide directs the fisherman’s movements by walkie-talkie. He is not a true fisherman, but a paid model.

In other areas, models dress in a rural fisherman’s garb wave fishing nets in synchronization. Tourists line the bank and prepare their frame.

When everybody is set, the models are directed to cast their nets. Per the New York Times, it is a lucrative business.

Liu Weishun manages one of the attractions and says that nearly 500 visitors stop at his site each day, paying $3 each. The models can make $15-30 per session.

While much of the photography opportunities are fiction, there is a backdrop of truth. Real, local workers are often nearby the staged areas and many of the models were once or are still farmers and fishermen.

Of course, the reviews are mixed. Many visitors know that the entire county is staged. Others do not and are disappointed upon coming to the realization.

Either way, Xiapu has evolved its entire economy to capitalized on the demands of the Instagram age.

Hundreds of residents have worked as models, straw-burners, tour guides or entrance-fee collectors. 90-year-old residents sit outside of traditional homes as tourists photograph them. Local “She” women pose with props that mimic ancient China.

And it has worked.

Between 2008 and 2019 (before the COVID-19 pandemic), tourism increased 10-fold, according to Xiapu official statistics. The transition has come a long way for a town that was once reliant on agriculture and fishing and comes amid changing times in China.

The Chinese government is encouraging rural tourism in the name of poverty alleviation. There is a market for nostalgia as the country modernizes rapidly and Xiapu has entered that market with only one catch— it’s an illusion.