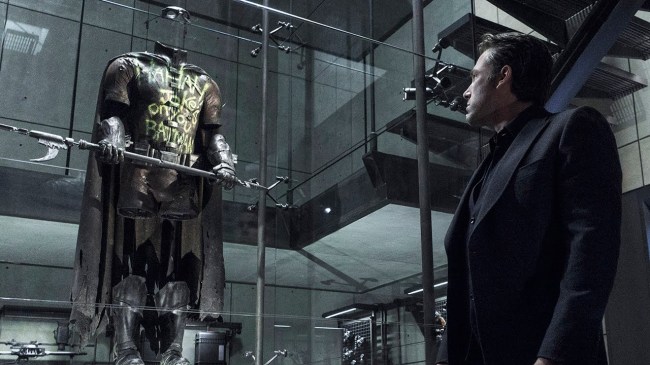 Of all the events in 2020 that prove we’re actually just trapped inside of a Matrix-like simulation, the announcement of The Snyder Cut of Justice League ranks near the top.

What was once and long a Twitter-fueled pipe dream became a reality seemingly overnight, as Warner Bros. and Zack Snyder announced the release of The Snyder Cut on HBO Max seemingly out of nowhere.

Perhaps more stunningly, not only is Warner Bros. moving forward with the Snyder Cut, but they’re committing an additional $30 million to the project, which is essentially the budget of a big indie movie. With those extra funds, Snyder will be able to truly finish his vision and further flesh out all of the half-baked ideas fans were ultimately given in the theatrical cut of Justice League. But will that completion of Snyder’s vision bring closure to one of the biggest teases in Batman v. Superman: Dawn of Justice, the Joker-scarred Robin suit? Well… maybe.

Not only did Snyder recently confirm that the Robin armor we see in Batman v. Superman is actually that of Dick Grayson’s, but he also hinted that the upcoming Snyder Cut will further explore his take on Robin.

In the comics book, the Jason Todd version of Robin is the one who was brutally murdered by Joker, so Snyder is obviously taking some liberties with the character and applying that backstory of Dick Grayson instead. Regardless of which Robin is it, I’m just looking forward to seeing a more gritty take on the character, which is the exact opposite of what we got the last time the Boy Wonder appeared on the big screen in the cinematic abomination that was Batman & Robin.

As for when we can expect to finally get our hands on Zack Snyder’s Justice League (I believe that’s the official title), it will drop on HBO Max sometime in 2021.