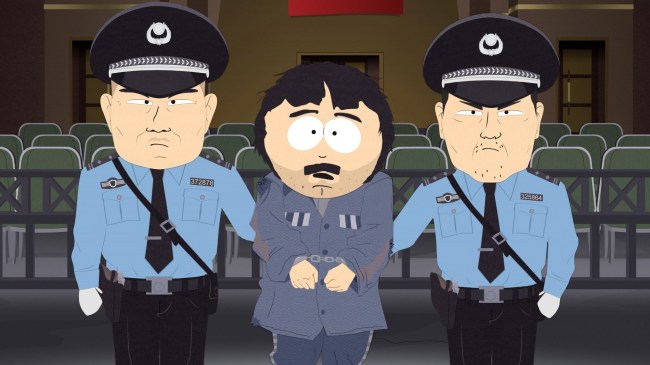 If you were planning on checking out Zedd in China, bad news, you won’t be able to. According to the EDM DJ, he has been banned from China for the heinous crime of liking a South Park tweet.

I just got permanently banned from China because I liked a @SouthPark tweet.

It sounds like a joke or a way to drum up publicity, but Zedd added clarity and assured everyone that it is very real. “Just to clarify, this is NOT a joke,” Zedd wrote on Instagram. “The government informed our promoters that if they don’t cancel my scheduled shows in China they would pull their cultural permits.”

The claim of being permanently banned from China was verified by Zedd’s publicist. “This is true, yes, but we don’t have any more info to give you at this time,” Adam Guest, senior entertainment publicist at U.K.-based SATELLITE414 agency, told CNBC.

Zaslavski, who was born in Saratov, Russia, and grew up in Kaiserslautern, Germany, is a high-profile DJ and music producer. He won a 2014 Grammy Award for Best Dance Recording, Billboard Awards for Top Dance/Electronic Album, and Top Dance/Electronic Song. The 30-year-old Zedd has a net worth of $35 million.

China’s censorship has been in the news ever since the Communist country responded harshly to Houston Rockets general manager Daryl Morey tweeting out support for pro-democracy protesters in Hong Kong. China has since punished the NBA, which quickly apologized for one of its employees being in favor of democracy.

China banned South Park and scrubbed the cartoon from the entire country following this season’s episodes that mocked the oppressive authoritarian regime and any American companies who kowtowed to their censorship in order to gain access to their immense market.

South Park creators Matt Stone and Trey Parker are not intimidated by China in the least and continued their assault on companies who bend the knee to the authoritarian regime. In the 300th episode of South Park titled “Shots” that aired earlier this week, Randy Marsh is forced to say “F*ck the Chinese government” by Towlie in order to get him to rejoin Tegridy Farms.