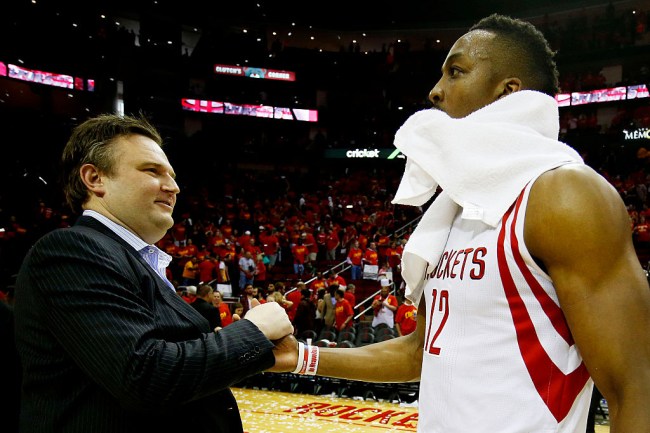 The NBA is getting criticized on Sunday night following their handling of a situation where the general manager of the Houston Rockets came out in support of the pro-democracy protestors in Hong Kong. Kowtowing to pressure from China, the NBA has distanced itself and denounced the statements by Daryl Morey.

From his own personal Twitter account, Morey simply tweeted a graphic that read: “Fight for Freedom. Stand with Hong Kong.” He then deleted the tweet that supported the pro-democracy protesters in Hong Kong who are fighting against the extradition of fugitives to mainland China. There have been numerous violent episodes between protesters and Chinese authorities since March 31, 2019. Things have escalated in recent weeks, where police have shot live rounds at protesters.

Why is the NBA apologizing to China?

Because the Houston General Manager had the audacity to tweet this.

Morey’s boss, Houston Rockets owner Tillman Fertitta, wrote that Morey did not speak for the franchise. “Listen….@dmorey does NOT speak for the @HoustonRockets,” Fertitta wrote on Twitter. “Our presence in Tokyo is all about the promotion of the @NBA internationally and we are NOT a political organization.”

Fertitta was ratioed on Twitter with most of the comments siding with Morey and the Hong Kong protesters.

“We recognize that the views expressed by Houston Rockets General Manager Daryl Morey have deeply offended many of our friends and fans in China, which is regrettable. While Daryl has made it clear that his tweet does not represent the Rockets or the NBA, the values of the league support individuals’ educating themselves and sharing their views on matters important to them. We have great respect for the history and culture of China and hope that sports and the NBA can be used as a unifying force to bridge cultural divides and bring people together.”

NEW: the NBA has released a statement on Daryl Morey: pic.twitter.com/FOI79W31b1

Morey has since issued an apology for his tweet.

“I did not intend my tweet to cause any offense to Rockets fans and friends of mine in China. I was merely voicing one thought, based on one interpretation, of one complicated event. I have had a lot of opportunity since that tweet to hear and consider other perspectives. I have always appreciated the significant support our Chinese fans and sponsors have provided and I would hope that those who are upset will know that offending or misunderstanding them was not my intention. My tweets are my own and in no way represent the Rockets or the NBA.”

2/ I have always appreciated the significant support our Chinese fans and sponsors have provided and I would hope that those who are upset will know that offending or misunderstanding them was not my intention. My tweets are my own and in no way represent the Rockets or the NBA.

But it may be too little too late because Fertitta had already liked at least two tweets advocating for Morey to be fired.

Tilman Fertitta liked these comments on Instagram of fans/commenters wanting him to get rid of Daryl Morey. #Rockets pic.twitter.com/0VGkgk9WmN

The Chinese Consulate in Houston even chimed in on the controversy and said: “We are deeply shocked by the erroneous comments on Hong Kong made by Mr. Daryl Morey, general manager of the Houston Rockets. We have lodged representations and expressed strong dissatisfaction with the Houston Rockets, and urged the latter to correct the error and take immediate concrete measures to eliminate the adverse impact.”

Houston has enjoyed a huge following in China thanks to Yao Ming being on their franchise from 2002 until 2011, and are said to be the second-most popular NBA team in China based on online engagement last year.

Many have pointed out that the NBA has had zero apprehension about been political in the past and that maybe their lack of “wokeness” on this subject is because it could cost the association money from the huge market in China. The NBA moved its 2017 All-Star game out of Charlotte because of the HB2 “bathroom bill,” making it the first major U.S. sporting event to be relocated because of political reasons since 1990. Last summer, NBA commissioner Adam Silver said the league was done using the word “owner.”

Remember, the NBA pulled its all star game from Charlotte over a transgender bathroom dispute, which was all manufactured outrage, and just bent the knee to China over actual human rights abuses. https://t.co/qz68o0sbfK

Think about this for a minute, Adam Silver banned the use of the word owner in the NBA because he said it was racially insensitive & then apologized to Chinese communists because one of his executives had the gall to say he supported democracy.

An American should never risk be criticized by his employer for supporting freedom.

If you care about American values, let the NBA know how you feel. pic.twitter.com/fNcNnZx4Hn

The @NBA stands with me for freedom and democracy.

It’s made all the difference.

I hope we can build bridges, instead of breaking them. https://t.co/6Y8V16lP7j

I get the @NBA not wanting to side with Hong Kong because it’s politically uncomfortable.

But apologizing to the Chinese dictatorship against the democracy they’re repressing? As an American sports league?

This is the worst statement the NBA has put out since Adam Silver became commissioner. I honestly cannot believe the cowardice and sycophancy to an autocratic regime reflected herein. To publicly chastise an executive who voiced support for an obviously correct cause is shameful https://t.co/fECSNd4wQX

The NBA is pro-communism, anti-American. Its league director must be fired immediately! @realDonaldTrump

We’re better than this; human rights shouldn’t be for sale & the NBA shouldn’t be assisting Chinese communist censorship.

It’s clear that the @NBA is more interested in money than human rights. Tonight’s statement from Commissioner Silver is an absolute joke.

The NBA is kowtowing to Beijing to protect their bottom line and disavowing those with the temerity to #standwithHongKong. Shameful! https://t.co/RBPJa04xzK

China is using its economic power to silence critics—even those in the U.S.

The United States must lead with our values and speak out for pro-democracy protestors in Hong Kong, and not allow American citizens to be bullied by an authoritarian government. https://t.co/87U4jgsAAp

By demanding Morey apologize for saying something that can’t even be legally accessed in China, the Chinese govt is exerting the kind of extraterritorial power it criticizes the US for doing. https://t.co/57Oqv1mgeg

The NBA managed to unite almost everyone in disgust for their cowardice and attempted appeasement of China's regime.

It also, inadvertently, managed to highlight how China attempts to silence criticism abroad.

Shame on the @NBA and the @HoustonRockets

I am so disgusted with the @NBA right now. I’m pulling for Hong Kong, of course, but China is literally an apartheid state committing cultural genocide and religious persecution on a mass scale. This should be a no brainer. Woke at home, lickspittles to power abroad I guess.