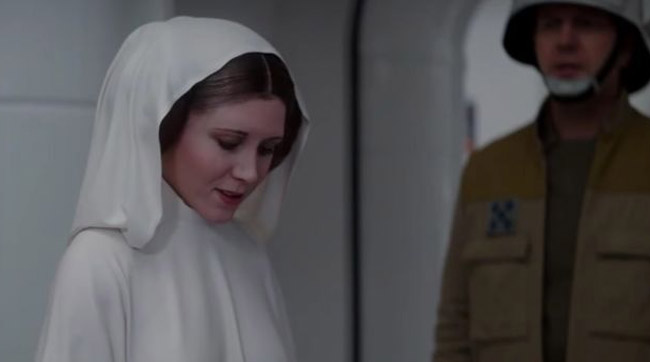 Did you know that there was a real actress that played young Princess Leia in Rogue One and it WASN’T Carrie Fisher? You do now.

Turns out that young Leia was actually played by a Norwegian actress named Ingvild Deila who was sworn to secrecy and couldn’t even tell anyone she was working on the film.

Now that the movie has been released and will be coming out shortly on digital and Blu-ray, the shackles have been lifted and Deila gave her first interview about her pivotal role to journalist Jamie Stangroom.

In the interview Deila mentions how when she tried out for the part she didn’t even know what the role was. Once she got word that she was cast she started to figure it out, however.

“I realized what was actually happening because I was sent two scenes from A New Hope, when Leia meets Vader for the first time, and the hologram monologue,” she said. “I was like ‘Oh my god is this happening?’ Those buns are big. I had the hairy buns. And I had plenty of dots all over my face, like an exotic fish. I looked very strange”

She studied the scenes for a weekend, filmed it, and then waited 18 months for the film to be released before revealing it was her under the work of ILM. In the meantime, people were talking about the film, getting excited for the film, but she was the biggest surprise in the film. She couldn’t say anything.

She also addressed whether she would have taken the role had Fisher already passed away before filming it.

“It would have been more difficult to say yes,” Deila said. “Also it depends whether she’d been informed. If she was against it then I don’t know if I would have said yes. But if she was fine with it, maybe yeah. It’s hard to know. It would have been way more complicated.”

Check out her entire fascinating interview below where she also discusses the possibility of Princess Leia spinoff movie.

And if you’re wondering how they pulled off this movie magic without anyone knowing, here’s a great video that explains all of that and more…

Here are a few more photos of an actress that we hope we get to see more of than the poor kid, Jake Lloyd, who played young Anakin Skywalker.