We are a mere 53 days from the Season 7 premiere of Game of Thrones and to everyone’s dismay, there has yet to be a full-length trailer released. Thankfully we did receive some official photos from Season 7 that may give us some insight into the upcoming monumental episodes.

One of the photos shows Daenerys Targaryen riding Drogon into battle.

When you look at the pic you first notice how enormous Drogon has gotten. GoT director Matt Shakman said that “the dragons this year are the size of 747s. Drogon is the biggest of the bunch — his flame is 30-feet in diameter!”

But there’s also a hidden clue about an upcoming battle in the photo as pointed out by Redditor imtechpro.

[EVERYTHING] From the Dragon Image. from gameofthrones

The gentleman on the left is Dothraki fighter who is wielding an arakh, a curved crescent moon-shaped sword. He is fighting against a Lannister soldier who is dressed in red and silver. So the Dothrakis led by Dany will battle the Lannister army this season, but where?

One of the photos shows Arya on a horse. But where is she? Winterfell? Is it the Inn at the crossroads? 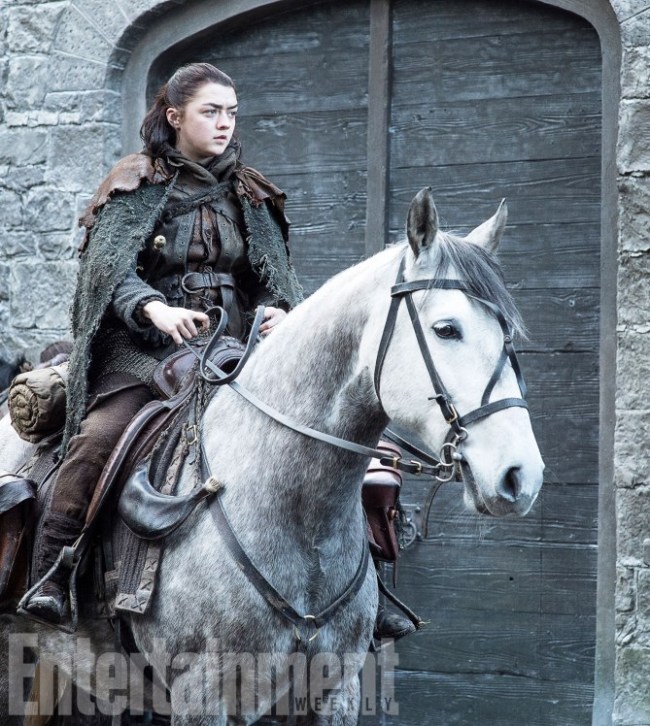 You can see all of the new photos on Entertainment Weekly.