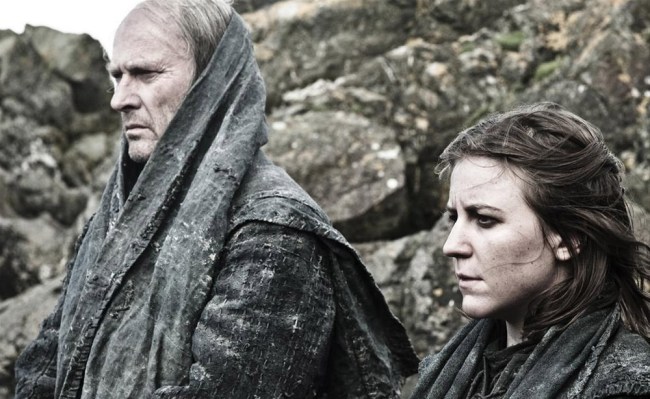 Look, I get it. The people who run Game of Thrones don’t like spoilers. Who does? But this story shows just how ridiculously manic the Game of Thrones people are when it comes to letting even the most insignificant secret about the show leak.

Gemma Whelan, who has played Yara Greyjoy since season two of the show, almost didn’t get to utter a single line because apparently she did something she wasn’t supposed to do: update her acting resume online.

Speaking to The Times, Whelan relayed this silly story…

The first lesson I learnt was when I first got the job. No one told me to keep quiet about it. I just thought it was normal to pop it in my Spotlight entry, so I wrote on my CV, “This summer, Gemma will be playing Yara Greyjoy in Game of Thrones.” And the internet went nuts. One of the lovely, lovely producers on Thrones called me into his office and said, “This is very serious. We almost can’t employ you because of this.”

Thankfully for her, she was able to overcome such as massive faux pas and was allowed to keep her part on the show. Because Lord knows, a secret like that getting out would, uh, do what?

Whelan’s acting credits up until that time included movies like Shortbread and Tea and bit parts in The Wolfman and Gulliver’s Travels. Not exactly blockbuster roles. So how was her announcing she was joining the cast of Game of Thrones going to affect, well, anything?

Of course this isn’t the first time we’ve heard how crazy the GOT folks are about secrecy.

Aidan Gillen, who plays Littlefinger, once had this to say to Esquire regarding what would happen if he were ever caught giving away secrets…

“I don’t know. Maybe you’d come home and there’d be guys around your kitchen table with lugers. I’m not on social media and stuff, but [with] every job and acting gig you’re required to not blab, not to get on social media and post pictures of where you are, who you’re with and what your costume is. Since I’ve never been a big social media person, it’s not a problem for me. But you can easily give the game away if you’re on Instagram. There is a no pictures rule on set, but sometimes people [take them]. And when people come up who aren’t really in the know who haven’t read their contracts—right down to extras—you can remind them that there are no pictures here.”

“We go out for drinks and stuff and we just end up talking about the show and then, because we’re a season ahead we have to really watch what we’re saying because you don’t know who’s listening to your conversation.”

Yeah, because if you aren’t careful and spill a spoiler or two, apparently your life could suddenly turn into this…