Jason Derulo Spent Over $70,000 At The Strip Club, Claims It’s A Legit Business Write Off 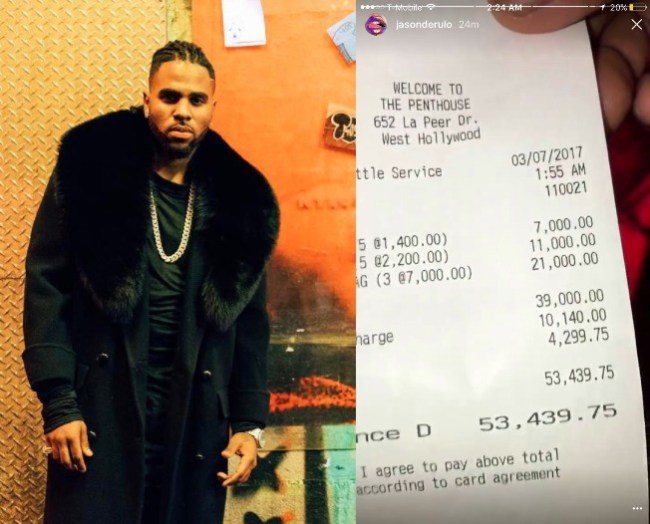 According to TMZ, last night Jason Derulo hit up Ace of Diamonds Strip Club in West Hollywood. Derulo’s been chillin’ on the charts with his new jam “Swalla” with Nicki Minaj & Ty Dolla $ign, so to celebrate he hit up the strip club to throw some money around that he claims is a legit business expense given his pop star lifestyle:

The singer was leaving AoD Monday night with a smile on his face and receipts in his pocket … all the proof he needs to hand over to his accountant. JD had proof he spent $53k in booze alone, and he explained why it’s a totally legit write-off.

Jason, who was rolling with rapper Sincere Show, also sprinkled $20k on the strippers.

He even has the receipts to give to an accountant:

Wait what?!? This is what @jasonderulo just posted on his IG story … come on?!?! pic.twitter.com/N2kqQsG6aJ

Derulo may be saying this is a business expense, but the bottomline is that other celebrities have tried to recoup their strip club expenses and failed in various ways. For example — Floyd Mayweather sorta tried the same thing when he made it rain at a Vegas strip club last summer. via The Washington Post:

But as the owners of a Las Vegas strip club found out, to their dismay, Mayweather is not above trying to save a few bucks with a questionable tax deduction. And they have the 1099 form for the $20,323.18 he dropped there in one visit to prove it.

The Daily Mail obtained a copy of that form, sent to the proprietors of Larry Flynt’s Hustler Club by Mayweather Promotions, LLC. That could represent an attempt by the former welterweight champion to write off the outing as a business expense, but the owners say the money went entirely to the strippers, who are independent contractors, and not the club itself.

“The reason for doing that is to get a tax write-off, but to me it is falsifying your tax records because he threw the money in the air,” one of the owners, Jason Mohney, told the Daily Mail. “If he wanted to 1099 somebody he should have gotten the names of all the entertainers he threw the money at.”

I’m just going to go out on a limb and say the three bottles of $7,000 Dom Perignon Luminous weren’t a necessity. Something tells me the $1400 bottle would have suited Derulo and his business associates just fine.