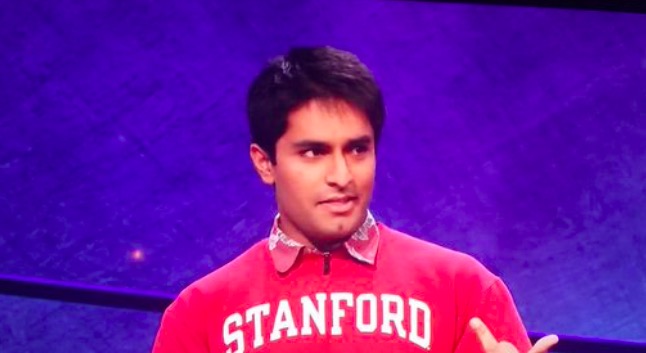 The general public’s perception of Jeopardy contestants is that they’re typically lifelong virgins who have an extensive Magic: The Gathering card collection and a crippling fear of interaction with the opposite sex. The hard truth is that in life one has two options: memorize the Encyclopedia or get laid. Very few can do both because intricate facts about the ancient civilization of Mesopotamia usually doesn’t play well as a pickup line. Sad.

But, during Jeopardy’s annual College Championship competition, one contestant and Stanford student broke the mold of your prototypical “Teacher, you forgot to give us homework” nerdberger and displayed his bad boy side.

Viraj Mehta flipped off Trebek and the audience during his in-game interview while telling a riveting story about pizza. After watching the video below, it’s impossible to believe this was an accident.

The gesture did not go unnoticed.

Yo viraj, what did America do to make you flip us all the bird #jeopardy pic.twitter.com/cHQaHtslfs

The Stanford contestant on Jeopardy this evening flipped the bird for a solid four seconds. pic.twitter.com/XfOoLcLiX3

Did this kid from #Stanford on #Jeopardy just flip off the entire country?

tell me this stanford student on #jeopardy didnt just flip the bird on national television while talking about pizza. 😂

Good on you, Viraj. Flip that prick Trebek the bird.

JK, Trebek, love you. And your mother.