Michael Phelps Claims He Wanted To Race A Great White Shark Without A Cage, Shows Off His Shark Fins

I’m sure you’ve heard by now, but if you haven’t you’ll be stoked to know that Michael Phelps is racing a great white shark for Shark Week 2017. Phelps was on The Tonight Show Starring Jimmy Fallon last night to talk about his upcoming race.

In the interview, Michael Phelps claims he told his wife that he wanted to race the shark without a cage but she talked him out of it because they have a family now. Do I believe this conversation happened? Yes. Do I think that Michael Phelps fantasizes about racing sharks in the water? Absolutely. Do I really think that Michael Phelps would’ve ever raced a great white shark without a protective cage? Hell no. This was clearly a conversation where two people were bullshitting around and one of them said ‘wouldn’t it be awesome…’ and the other was like ‘hahahaha, yeah, but you’re stupid’.

On NO PLANET was Michael Phelps EVER going to race a great white shark without a protective cage, even if he thinks it’s fun to joke about….Moving on, I had no idea that Phelps is such a big fan of sharks. He’s never struck me as a science-minded individual, so it’s kind of interesting to see another side of him for once.

My favorite part of this interview was the sneak peek we got at the shark fin apparatus Michael Phelps will be using to race the great white shark. This gives us some insight into how the race will play out: 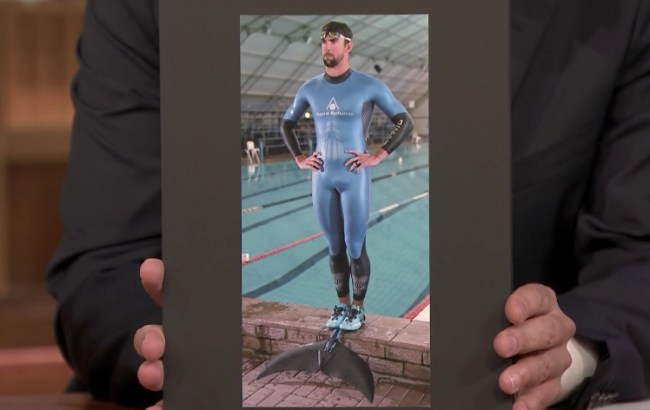 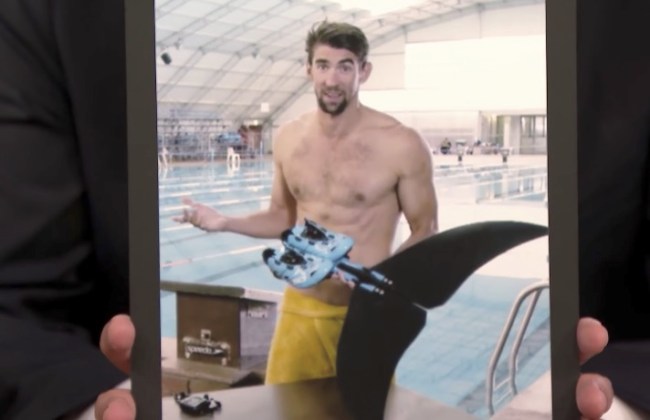 Even with this cutting edge technology, do you think Michael Phelps has any shot in hell at beating a great white shark in a swimming race? He’s the greatest competitive swimmer to ever live. The fastest man to ever get in the water. But I don’t see him beating a shark, no shot…I hope I’m wrong.

You can see the trailer for the July 23rd race between Michael Phelps and a Great White Shark HERE on BroBible.