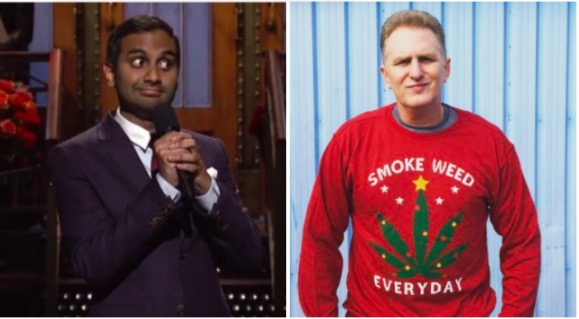 Actor, director and podcaster Michael Rapaport may have been more enraged with Aziz Ansari’s Saturday Night Live monologue than the subject of his jokes, Chris Brown. Aziz famously called Donald Trump the “Chris Brown of politics” for his supporters’ willingness to brush the extracurriculars aside. Brown was not pleased with this comparison, calling Aziz “ALADDIN” and urging him to “HOP OFF MY D*CK.”

Rapaport came in from the rafters to deliver a few haymakers to Aziz and his ‘holier-than-thou’ attitude. Speaking on his  I Am Rapaport podcast, the 46-year-old did not mince words when speaking about Aziz.

“Obviously, nobody supports beating women. OK. This guy has obviously suffered, you see all the trouble he has and all the trouble that surrounds him. He’s definitely dealing with some sh*t and dealing with his own personal demons. But Aziz Ansari, you are one of these holier-than-thou political correct police. This little f*ck. Mr. Racial, he’s like Mr. Provocative… He’s like, ‘Oh, the brown people this.’ He’s always talking about the brown people and I get that he tries to be racially provocative. He is racially provocative…

The only conclusion I can draw from this is that Aziz definitely banged Rapaport’s girl.