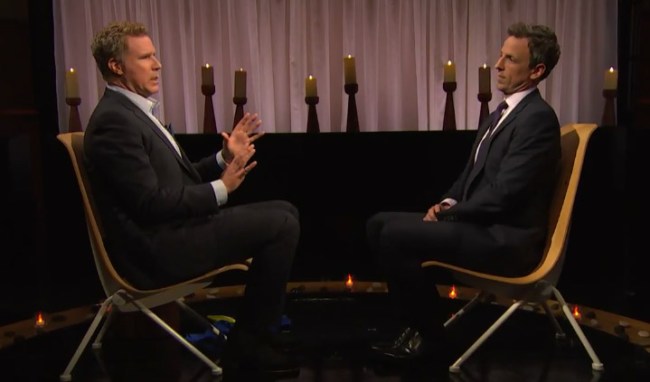 Apparently Seth Meyers was basically a jerk to everyone he worked with on Saturday Night Live. Because just like Fred Armisen, Will Forte, Rachel Dratch and Kristen Wiig before him, Will Ferrell sat down with Seth on his show to “clear the air” about all the times they were dicks to each other.

Meyers went first, saying, “Will, I’m sorry that I forgot text you on your birthday this year. Things have been really busy with the baby and it slipped my mind. Do you forgive me?”

Ferrell, obviously still upset, replied, “It was my birthday. And it was a big one. I turned 29.”

Next up, Ferrell apologized for letting a venomous rattle snake loose in Meyers’ office during his first year on SNL. “Do you still think it was funny?” asked Meyers. “Yes, I do,” replied Ferrell, calling Meyers’ trip to the emergency room “classic.”

“What am I supposed to do now, go to a dumpster and scrounge around for food like some stupid raccoon?” asked Ferrell, to which Meyers suggested eating alone.

Ferrell agreed, but only if Meyers paid for it, saying, “I’m going to go to Bubba Gump Shrimp, so I’ll be housing down a bleu cheese Bubba burger and a side of ‘Run, Forrest, Run’ fries. I gotta wash it down with a couple of Lt. Dan-aritas. And for dessert, I’m gonna get a box of chocolates. You know why, Seth? Because you never know what you’re gonna get. So, I’m going to need about $500.”

Things were finally looking good for the two of them until Ferrell admitted being the founder and CEO of the website SethMeyrsSucks.com, “The No. 1 stop on the web for Seth Meyers haters to connect and bond over how much they hate Seth Meyers.”

Then Meyer tried to touch Ferrell and it all pretty much went to shit.