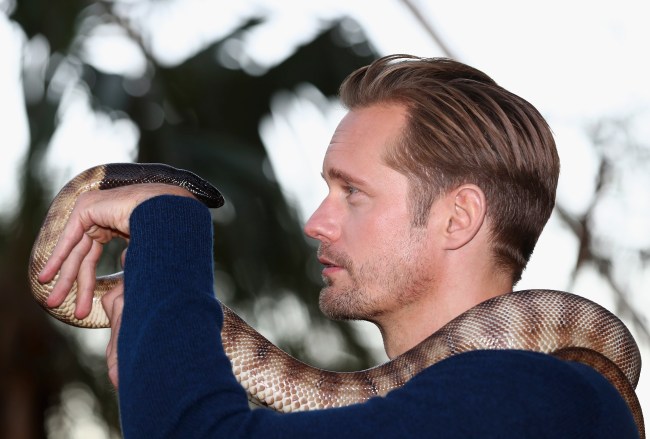 One of those ‘other’ projects that get lost in the fold is The Legend of Tarzan where he played Tarzan/John Clayton alongside stars Samuel L. Jackson and Margot Robbie. That film had a budget of $180 million and took in $356 million worldwide ($126M gross in the USA) so it wasn’t a flop by any means.

I never saw The Legend of Tarzan (2016) but my parents saw it in the theater and raved about it which means I’m almost certain it was a shitty movie but that didn’t stop Alexander Skarsgard from going all out and working up an 8-pack of abs. His nutritionist for that film was Magnus Lygdback who recently sat with Men’s Health YouTube to discuss the diet Alexander used to get those 8-pack abs reminiscent of Brad Pitt in Fight Club.

Trainer + Nutritionist Magnus Lygdback discusses how this is a ‘pretty extreme diet’ that they only did for a ‘short time’. This isn’t something that you should be out there trying to emulate year-round.

His three cycles of ‘building a superhero’ include (1) Build-Up/Bulking Cycle, (2) Cutting Cycle, and (3) Maintenance Cycle while filming. The diet was primarily seafood-based and Alex was only allowed to have carbs twice a day. Those were ‘slow carbs’ including Brown Rice, Quinoa, Barley, Farro, and Cold Potatoes.

Here are those abs from The Legend of Tarzan, by the way:

The ‘good fats’ he’d consume in his meals included avocados and unsalted nuts. The nuts were unsalted during his Cutting Phase because salt binds to water and you’re trying to expel that water when you’re cutting. During the Cutting Phase, he stayed away from Sugar and Fast Carbs. I like how Magnus says ‘we stayed away from’ in this video like it was him out there eating like a madman and not Alex.

Those fast carbs they avoided were Bread, Pasta, Mashed Potatoes, Soda, Juice, and (most) Fruit. Skarsgard also went dairy-free and gluten-free whenever possible…I’ve been out of this diet like 8 steps ago. He points out that some people really respond to dairy/gluten-free diets while others are virtually the same when eating those foods. With only 8-weeks to get him into superhero shape he doesn’t want to take any risks so everything is taken to the extreme.

Here’s the nutritionist breaking down his actual meals, with a list of those meals and workouts below:

His daily intake included ~135g Protein, 70g Fat, and 200g Carbs while cutting and it was adjusted based on his daily workouts/activity. As for what the meals looked like, I think you’ve got some idea at this point but here are some specifics:

1. Mornings start with a shot of Ginger, Cayenne, and Lemon Juice
–Cardio for 30 minutes, either High-Intensity Intervals (HIIT) or something restorative like swimming

3. Snack #1: 3 hours after breakfast he’d have Shrimp or Mahi-Mahi

4. Lunch: 3 hours after the snack he’d have a lunch full of vegetables, slow carbs, and salmon

6. Dinner: came right after his evening workout, Dinner and lunch would be virtually the same and included lots of vegetables, slow carbs, and salmon

If you wanted some more specifics on his workouts for Tarzan you can check this out:

Could I pull off a diet like this? Hell, no. I can’t even stick to the diet I’ve been on for nearly a year. I find myself binge eating almost every night these days because, well, I’m hungry. And if my body’s craving food there’s probably an underlying reason why. I know it’s not dehydration because I’m chugging about a gallon of water every single day.