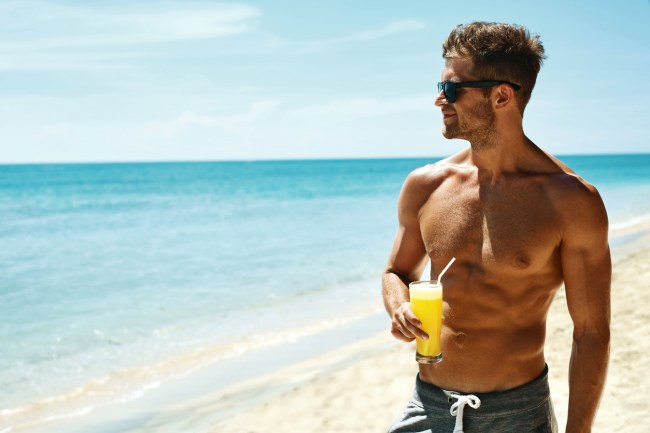 In a matter of months, the gloom and doom of winter will be in our rearview. Ah, yes, if you are reading this, it looks like you have survived yet another one of mother nature’s post-apocalyptic showings of the seasons. Congrats! We are now over the hump of Hell, so it’s time to pull ourselves out of hibernation and start thinking about diving headfirst into that time of year when boats, brews and babes are in full effect. We can almost hear it now. Soon, the birds will be chirping again in the mornings, meteorologists will look a little less suicidal when giving their three-day forecasts, and the grey, cold-ass days that we’ve struggled through since Christmas will be replaced with sunburns and heat stroke. Fucking-A, right! Dust off those flamingo shirts, boys, summer is upon us.

The bad news, however, is you look like shit. We’re sorry to put it so bluntly, but after treating several months of seasonal depression with an animalistic diet of pizza, beer and other caca cuisine, it seems that some of you are headed into summer looking like somebody’s unfuckable uncle.

But don’t despair. There is still time to whip that ass into decent shape before the Memorial Day weekend. All you have to do is stop eating like a teenager – so, like, delete all of those food delivery apps from your phone, right now — start exercising like a fiend and maybe think about going a little less Leaving Las Vegas. While the sauce has done an admirable job of making the long, cold winter months more tolerable for some of us, it has also wreaked havoc on our bodies, giving us bulging beer guts and man boobs to beat the band. We’re freaking doomed if we don’t act fast.

Still, that doesn’t mean we have to ditch alcohol altogether to get into fighting shape for boating season.

It goes without saying that you need to start drinking a little smarter than you’ve been doing for the past few months. As much as we hate to admit it, that probably means putting down the beer for a while. That is unless you fully intend to get fitted for your first Double-D sports bra this year, and perhaps participate in the Fat Boy Review on ladies night down at your local strip club.

Seriously, boys, not only does that sissy low-carb piss water known as light beer bring out the hipsters in droves, it can also turn a man into a heaping pile of slobbery. Admittedly, the situation isn’t as dire if you happen to be one of those wierdos with the willpower to drink only one or two ever so often. But for the real savage drinker, we’re talking about the guy who typically knocks back six or so before he goes out on the town, that can mean taking in several hundred empty calories a night.

Listen, we’re not even trying to say that beer is all bad. In fact, we would never. In addition to being a great source of good times on the drunken wings of our lives, some studies have shown that the suds making American burp again also have therapeutic properties. No shit, researchers from across the globe have found that those ever-so-popular lagers, ales and stouts can provide benefits for our eyes, teeth, bones, heart, and immune system. Hell, one study even suggests that beer might help prevent us from getting the diabetes that we are well on our way to if we don’t cut some of this godforsaken depression weight. Granted, going on a full-blown beer bender isn’t going to do most of us any favors in the long run, but, let’s just say it’s the thought that counts.

Now, moderate beer consumption might be able to make its way back into your life once the summer season gets underway. See, that’s more good news. But, for now, it might be better to just stick with hard liquor. Wait, wait, what? A hooch diet? Yeah, although it might sound ridiculous to suggests that demon alcohol like whisky, tequila and vodka are more suitable for a man trying not to come out of the gate this year with a full-on Dad bod, these drinks are actually the smarter choice.

Not only do they hit harder than beer, but they are also seemingly designed with the health-conscious boozehound in mind. They are low in carbohydrates and have fewer calories than most brews. And while not all carbs are the devil incarnate, like some health nuts might have you believe, the ones we get through alcohol can be mischievous as all-be-damned. These little fuckers have a way of infiltrating our systems, causing a spike in blood sugar that eventually leads to the creation of fat. And while spirits do average around 97 calories per shot, they come in at zero carbs. Ah, yes, you can almost feel those abs fighting their way to the surface now, am I right?

At the bar, however, you’ve got to be careful. All of those high-priced cocktails they are slinging are usually loaded up with insane amounts of sugar. These are not at all conducive to the physique of the most doable dude on the lake this summer season, we assure you. Some of these beverages have just as much sugar per serving as sodas and fruit juices. Avoid them like the plague. The better option is to just do a vodka and soda water with a splash of lime. Not only are you getting the benefit of zero carbs from the booze, but there is absolutely no sugar in the mixer.

Or you could always try our original, low-calorie Moscow Mule if your snobbish palette requires more flavor.

But what about wine? Well, if you are one of those hoity-toity dudes that gets his kicks from the likes of Cabernet Sauvignon, Riesling and Merlot, you’re still in better shape than the average beer drinker. Sure, these beverages can have more than 100 calories per glass, but they are more merciful when it comes to carbs. What about a Chardonnay? Get the fuck out of here with that noise!

Look, all of this healthier drinking crap really just depends on the individual. Some of you lucky bastards can drink beer all day long and never gain a pound, while others, myself included, seem to pack it on just by hanging around the craft beer section a little longer than usual. It is essential to find what works for you and, sweet whimpering Christ on a sharp stick, don’t make yourself miserable in the process. It’s not worth it. Sure, we want to look our very best when we venture out this summer for all of the legendary times that are sure to be had, but, let’s face it, a day not lived is one that is undoubtedly wasted. I can’t remember who said that, but they are wise words, nonetheless. And sometimes, living means sucking back a 12-pack of your favorite brew and devouring a whole pizza in front of the television. It’s the little things, you know? There is always time to make smarter decisions regarding your health. Just keep in mind that no matter how much of a gnarly beast you become, there will always be someone out there willing to pork you. And I’m telling you, boys, that right there is what helps me sleep at night.