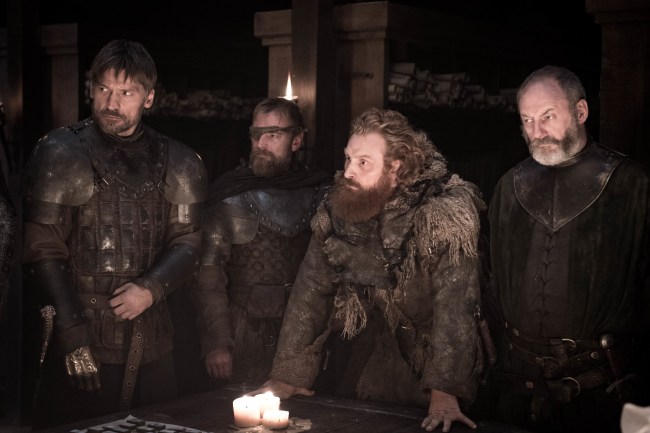 The second episode of HBO’s Game of Thrones 8th and final season aired last night and reviews were mixed. Strictly speaking, not a lot happened and this rubbed some fans the wrong way. To others, this look at the character’s downtime and how they interacted with one another when their lives weren’t on the line was a refreshing episode.

All signs point towards S08E03 being the epic Battle of Winterfell between Jon Snow, the Night King, and their respective armies. And a quick look around shows that the cast is ready. The characters who are jacked (Tormund, Jamie, etc) are ready to fight.

This clip from Screen Rant takes a look back at how we got here, a dive into how each of the characters maintains their physique to not only add a sense of realism to the battle scenes but to stay healthy when they’re on set shooting for 55 days at a time like they did with the upcoming Battle of Winterfell.

To recap a little: Kit Harington (Jon Snow) has a naturally spiked metabolism and gaining weight is difficult for him so he eats 5,000 calories a day when he’s trying to put on muscle and he uses a wide array of herbs to add flavor to otherwise bland protein-rich foods like chicken and salmon. Nikolaj Coster-Waldau hates working out at the gym. He gets in his cardio by running outdoors, mountain biking, or cross country skiing.

When lifting, Nikolaj focuses on his core. He was previously plagued with chronic back injuries and bulking up his core helped him treat that. The actress who plays Missandei, Nathalie Emmanuel, is a yoga freak. She’s a certified yoga teacher and puts in as much time in the yoga studio as possible.

The workouts of Hafþór Júlíus Björnsson aka The Mountain aka the Strongest Man in the World has been heavily documented here on BroBible so won’t bother recapping those. You can see all of our coverage on The Mountain by clicking that link. Before I accidentally recap the entire video I’ll just say that the gist of this is they bulk up or slim down by eating right and getting in a well-crafted cardio + lifting circuit. It’s not rocket science. If you eat well and get in the gym regularly you’re going to look good after several months.