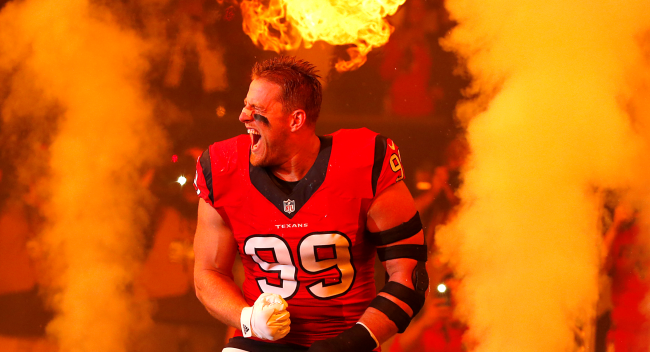 Three-time NFL Defensive Player of the Year JJ Watt, who obviously knows a little bit about lifting weights, called out influencers using fake weights in social media workout videos with a social media video of his own.

Watt, who often posts videos of himself working out to Instagram, apparently has had enough of people posting videos on social media using fake weights so he decided to show exactly how it is done.

Captioning his video “beware the bullsh-t,” Watt is seen doing back squats with what appears to be an ungodly amount of weight on the barbell.

However, as you continue to watch Watt’s video, you will realize there is a reason for that. He’s actually only squatting around 100 pounds.

After finishing his reps, Watt takes off one of the bumper plates and tosses it up in the air and catches it one-handed, then tosses it on the floor.

He then grabs his camera and pans to the plate on the floor next to another 45 pound where we see that the one he was using for his squats, even though it looks very impressive, is actually just 2.5 kilos.

As Men’s Health accurately points out…

Fake weights are an issue in the world of fitness influencers, where clout and appearance often mean more than actual performance or training prowess — but elite level athletes have also been known to stretch the limits of reality from time to time to flex on the ‘Gram.

These videos — and other misleading tools, like influencers who refuse to disclose they use performance enhancing substances—spread disinformation in the fitness world, which is harmful to audiences that don’t understand the people they follow aren’t totally on the level. That smokescreen can perpetuate issues with body image and expectations about what one might realistically be able to achieve in the gym, among other problems. To put it bluntly, videos like these are examples of fraud. Watt is right to highlight this problem using his platform, and it’s a good opportunity to take a moment and think about the type of workout content that you use for inspiration and motivation.

While Watt doesn’t express specifically who he is calling out with his video, there’s little doubt that all of the other videos he has posted showing himself working out were done using weights that are very, very real. Just ask some opposing quarterbacks.