#Cars
BroBible may earn a commission if you buy a product or service via links in this article.
by Cass AndersonApril 26, 2018 3:36 pm 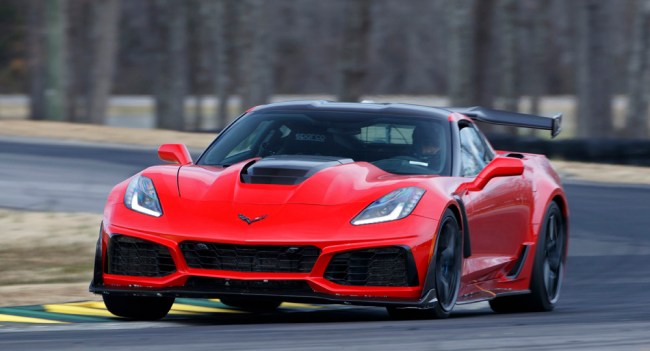 The 2019 Chevrolet Corvette ZR1 is the fastest and most powerful Corvette ever built. We got our first look at the Corvette ZR1 back in November. In late March, the Corvette ZR1 started breaking records when it went 0-to-60 MPH in just 2.85 seconds and set a new lap record at VIR.

Today, the 2019 Chevrolet Corvette ZR1 is back in the news after driver’s POV footage has emerged of the supercar hitting a top speed of 212 MPH thanks to the 6.2-liter supercharged LT5 V-8 engine which is pumping out 755 horsepower. When doing a top speed test it’s customary to run two laps on the longest available piece of pavement. One lap is run against the wind and the other lap is run with the wind. The average of the two laps is then taken and the car’s top speed is determined.

The Corvette ZR1 ran its top speed test laps at the 7.6-mile long Automotive Testing Papenburg GmbH oval track with lap times of 210 MPH into the wind and 214 MPH with the wind for an average of 212 MPH. The split-screen footage shows the driver and passenger and the car plowing its way across the track after 2x the top speed of the car you probably drove to work today, and somehow the passenger seems completely chill even though they’re cruising along at over 210 MPH:

I feel like we should crowdfund one of these supercars. We just need to buy one, and then we can charge bachelor parties in Las Vegas a shit ton of money to sit in the passenger seat and ride along as a professional driver takes them over 200 MPH. How long would it take before we made our money back, a year at the longest?