#Cars
BroBible may earn a commission if you buy a product or service via links in this article.
by Dan ShapiroOctober 13, 2020 2:05 pm 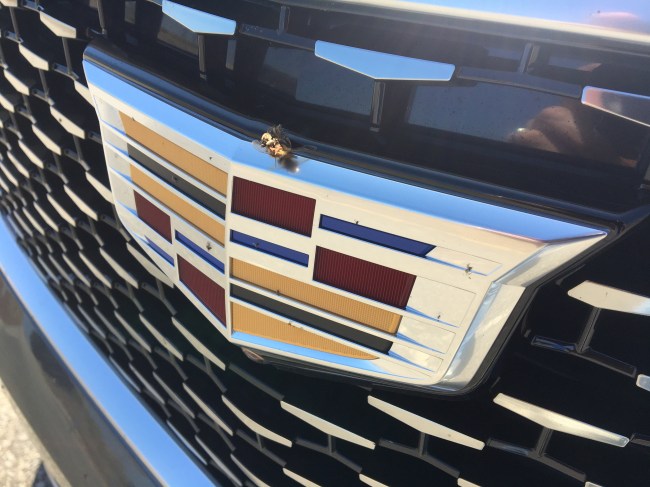 Only one bee was harmed while writing this story. It was retribution after taking a sting to the forehead, just weeks prior. Besides, we were being socially distant and responsible out on the road, so the casualty inflicted little to no guilt.

Cruising up the California coast in the middle of a pandemic, the 2020 Cadillac XT6 was an ideal shelter and vessel for the 230-mile trip from the barren and desolate streets of downtown Los Angeles to the pristine and magnificent shores of Cambria, California. Comfortable, luxurious, sturdy, and powerful, the XT6 was more than just a mere vehicle on this particular jaunt up Highway One. It was a moving safe haven, harboring my cohorts and me in socially distant fashion, something I never before even had to consider.

The pandemic changed everything of course, and suddenly it became a legitimate concern of how to travel safely with a friend recently returning from Thailand. His pre-road trip COVID test came back negative fortunately, but I still expressed concerns about sharing confined space and air with a dear pal over the course of the five-hour trip. The Cadillac XT6, the Premium Luxury model to be specific, eliminated those concerns thanks to its 119-inch length. It was that third row of seats, where my buddy would be sitting more than six feet away, that really made this all possible in the first place.

With the social distancing conundrum solved and my fears squelched, we departed LA early in the morning, as is customary. The traffic gods played kind on this particular day as the northbound lanes on US-101 parted like the Red Sea. This is not to say there was anything biblical about this specific drive, but anyone who knows how dense traffic on the 101 in LA county can be heading into Ventura understands the epic nature of speeding past places like Calabasas and Simi Valley without restriction.

The Cadillac XT6 obliged by easily mounting the hills and smoothly descending the valleys during the opening hour of the trip. 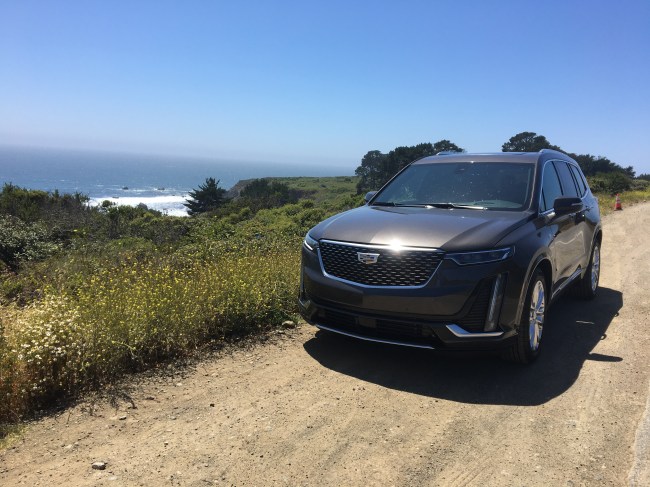 Having made this trip many times before, I was prepared for the elements and the ever-looming threat of traffic. It was a holiday weekend after all, so not only were there road trip tunes galore blasting through the 8-speaker Bose premium setup and Apple CarPlay touchscreen, but located centrally between the drivers row and the socially distant rear row, was a cooler stocked with ample chilled Lacroix cans, along with a bevy of healthy snacks, further emphasizing the need to stay hydrated during the pandemic, with a variety of vitamins at our disposal. We were definitely not playing around on this pandemic road trip.

The lack of traffic changed every expectation on this holiday drive from LA to the central coast. And while the XT6 appeared to be the ideal vehicle for its size and comfort, it quickly became a more-than suitable chariot for its speed and power.

Never would I have expected a luxury SUV to simultaneously provide such muscle and grace, but the Cadillac XT6 obliged the full weight of my right foot, smoothly scaling the 2,255-ft elevation of the San Marcos pass with ease, handling the tight twists and turns of this 35-mile respite away from the 101. My foot pressed down, I was able to feel the full extent of the XT6’s 310 horsepower and 271 pound-feet torque.

Making such incredible time on this journey, the challenge now became how to fill the extra two hours before we would be allowed to check in to our AirBnB. Fortunately, I’ve made this trip many, many times, and with ample time to kill, we made a quick stop in Morro Bay, an idyllic beach town 15 minutes north of San Luis Obispo.

Stopping for lunch at Giovanni’s Fish Market, a legendary local outdoor haven for fresh catch and fried seafood delicacies, we later stocked up on dehydrated beef at the nearby House of Jerky. Perhaps it’s all the cows nearby, roaming free in the lush pastures of the many ranches, but the California central coast has some mighty fine jerky, and the cooler was now carrying enough rations for the remainder of the weekend.

Still early for our arrival, we continued up Highway One, past Cambria, on to San Simeon, home of the Hearst Castle, and finally up to Ragged Point, the gateway to Big Sur. 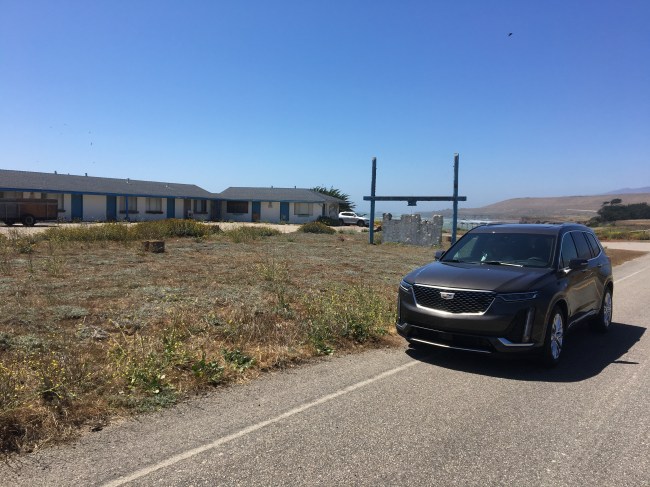 It’s rare to choose to drive longer and further than needed, but the Cadillac XT6 was so smooth and comfortable, handling the coastline drive and gripping the road so tightly, that the extra miles were pure pleasure. To commemorate the occasion, we stopped by the abandoned Piedras Blancas motel for a walk to the beach.

And that’s where and when we found our lone casualty: a bee wedged in between the front grill and the Cadillac logo, which is meant to symbolize creativity, excellence, passion, and grandeur. Legend has it that the coat of arms is based on the family crest of Antoine de la Mothe Cadillac, the French military leader who founded Detroit in 1701, but on this day it doubled as the headstone for an unsuspecting bee who bit off more than it could chew.

The casualty was the lone low point in an otherwise smooth, seamless, enjoyable, and socially distant road trip. But who am I kidding, there was a cruel and just irony intertwined in the kill. Just weeks earlier, I took a sting directly to the forehead, so there’s no remorse for this arthropod fatality. That bee should’ve known better than to try and take on the Cadillac XT6.