2020 Buick Enclave Essence Review: Back on the Road Again

The Las Vegas strip reopens today. Once again, casinos and venues are packed, as visitors flock to Sin City after months of quarantine and closure. It truly is the dawning of a new era.

Already lining up an itinerary to hit the road and return to Vegas this summer, I can’t help but think back on my last high-speed trek through the desert. It was a different time, and I found myself behind the wheel of the most unlikely of vehicles: the 2020 Buick Enclave Essence.

Picking up the Enclave in Los Angeles before the 270-mile drive to Las Vegas, it was impossible to ignore the preconceived notions I’ve held about the Buick brand for 30 years. Growing up, my best friend’s dad drove a Buick, and he was constant, incessant even, in his emphasis that this was as good as American cars could get. This wasn’t an isolated incident.

Every few years, when the lease was up, there’d be a new Buick in the driveway, and we knew there would soon be some awkward lecture about the Riviera or Regal, whatever model was in fashion back in the late 80s and early 90s. So, when I was presented with the option to take the 2020 Enclave Essence out for a spin, I figured the best way to approach the ride was to assume the identity of buddy’s dad. I even grew the perfect, bushy dad moustache for the occasion. 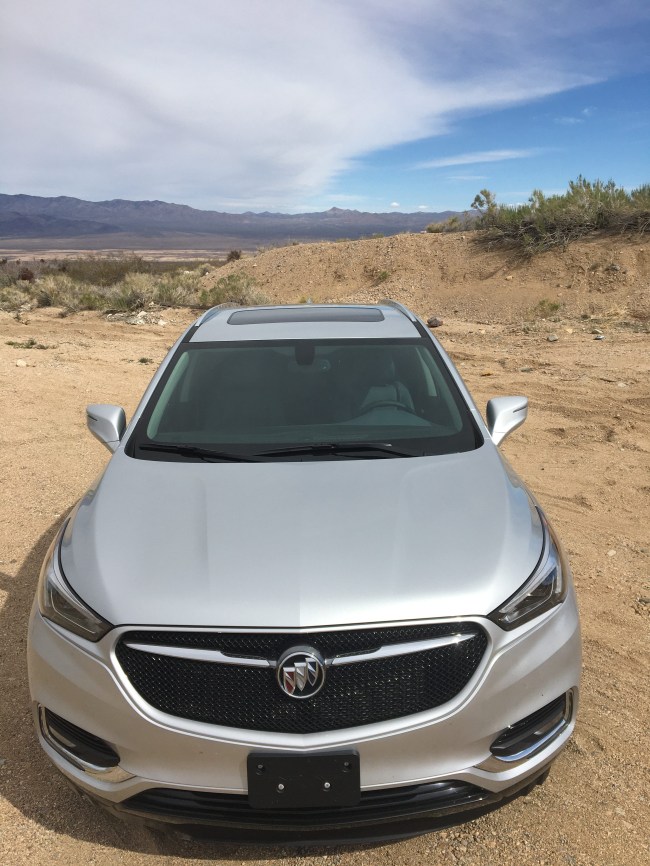 Hopping in the driver’s seat, the confines of the Buick Enclave feel rather comfortable and familiar. And, I can’t stress enough how important comfort is when driving the long haul. Sure, safety is paramount, but comfort is essential.

Looking around the cabin, the Enclave seems somewhat familiar. Having spent some time inside the Chevy Blazer and the Cadillac XT5, I see traces of GM style and engineering, although the Enclave Essence is a larger beast than the aforementioned vehicles, with an extra row of seating. Still, it’s a comfort to be able to hop right into an SUV and immediately feel like you’re in your own car, familiar with all the controls and buttons.

Driving from LA to Vegas, I know all the towns, all the stops, all the roadside attractions and landmarks. There’s plenty to see along the way: the ghost towns outside of Yermo, Zzyzx and the Mojave National Preserve, the Seven Magic Mountains, and, of course, the Mad Greek diner in Baker. However, this road trip is mostly about driving, so I opt to forgo any stops and jam straight through.

Unlike my previous drive to Las Vegas, when I stormed through the desert at breakneck speed in the Chevy Camaro LT1, this trip is a little more chill on the accelerator. Without the need to hit top speeds, I still manage to push the 2020 Buick Enclave to its upper reaches, at least for a bit, just to feel the 3.6 liter engine and the full extent of its 310 horsepower. 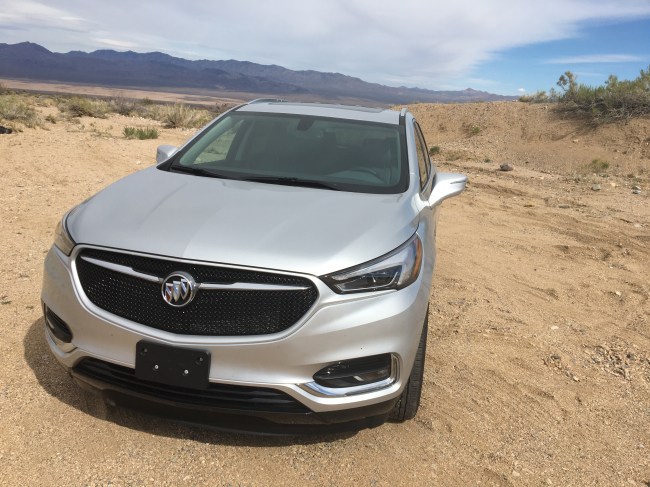 The Enclave Essence obliges the light force of my lead right foot, easily summiting the El Cajon pass and its 3,700-foot altitude. This is obviously more than a luxury SUV. It’s a luxury SUV with power that can handle the mountains, steep climbs and sharp drops.

Riding solo on this trek to Las Vegas, I think for a moment about the possibilities of the Enclave. This is an ideal road trip vehicle for a couple, a group of friends, or an entire family. There’s ample space, and all the bells and whistles: climate controls, Apple Car play, touchscreen dash; that give the driver peace of mind while passengers don’t need to feel cramped or antsy.

The Enclave also has tremendous towing capacity, able to haul 5,000 pounds on the rear hitch. And, although I don’t intend to tow any additional freight, this is an important feature for mountain sports enthusiasts, who might load plenty of gear into the vehicle, en route to the slopes or hiking trails. I can easily see myself taking the Enclave up to Lake Tahoe, or even further, to Utah or Aspen. It’s built for distance.

Arriving in Vegas in just under four hours, I can hear my friend’s dad in my head, laughing at the irony that Buick lives up to everything he always said about the brand. No doubt the 2020 Enclave Essence is a fun ride, and what it lacks in flash or style, it makes up for in practicality, power, and yes, comfort.