Breaking Down The 22 Best Whiskeys 2019: Bourbon, Rye, Single-Malt, And Blends 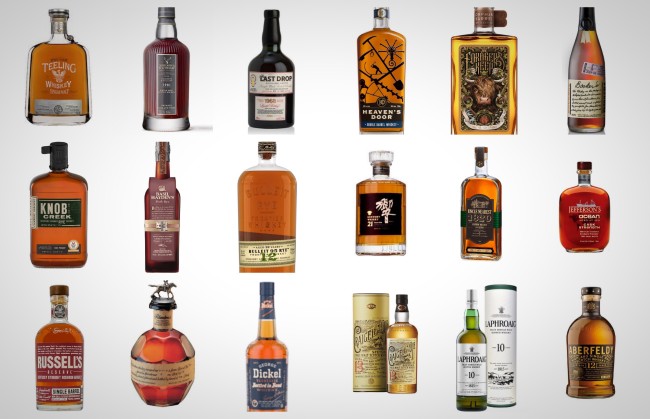 Few things in life compare to the joy of drinking the best whiskey on the planet. I love whiskey in all forms (Bourbon, Single Malt, Blended Whiskey, Rye, etc) and from time to time here at BroBible I like to throw together a roundup of the best whiskeys money can buy, from affordable Bourbons to extremely high-end single malts.

It has been a few weeks (months?) since I last paid tribute to the best spirits money can buy so I figured now was as good of a time as any to put this on your radar with the holidays upon us. So, in honor of my deep appreciation for all things whiskey from Bourbon to Single Malt Scotch, I put together a collection including some of my favorites.

I’ve broken them out into types including Ryes, Single Malt, Bourbons, and I’ve classified the rest under ‘Other’ (Tennessee, Japanese, etc). I don’t want to spend too much time setting this up because you already know what this is, a roundup of the best whiskey of 2019 and that includes the best Ryes, best single malts, best whiskey blends, and more. 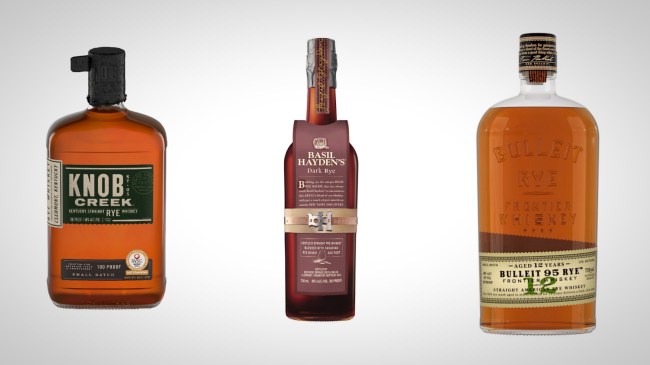 Here we see three of my favorite Rye expressions. By law, an official ‘Rye Whiskey’ must be made from a mash of at least 51% Rye and all of these qualify. We begin with the Knob Creek Straight Rye Whiskey which has a strong spice and hints of oak with vanilla to the taste. Second is Basil Hayden’s Dark Rye Whiskey which has been on my bar shelf since the month it came out. I love this Dark Rye which carries a finish of lingering fruit and has a complex taste of caramel, oak, spice, and dried fruit.

The Bullet 12-Year-Old Rye is a newer expression, it was released in March 2019 so just a few months ago. This small-batch Rye has a mash bill of 95% rye and 5% malted barley and has plenty of spice and oak on the nose while it opens up with strong notes of clove and vanilla. 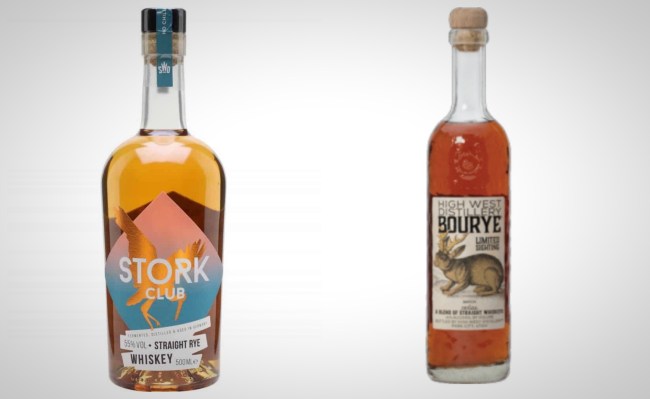 Here we only have two Rye expressions. First is the award-winning Stork Club Straight Rye Whiskey which has notes of vanilla, toffee, bitter chocolate, and rye bread. Certainly an eclectic collection of tastes. Interestingly, this is a German spirit and one that has turned a lot of heads.

To the right is the High West Bourye which is a ‘jackalope’ style blend of Bourbon and Rye, hence the Jackalope on the label. It carries tasting notes of maple, birch root, red cherries, and thick spice. 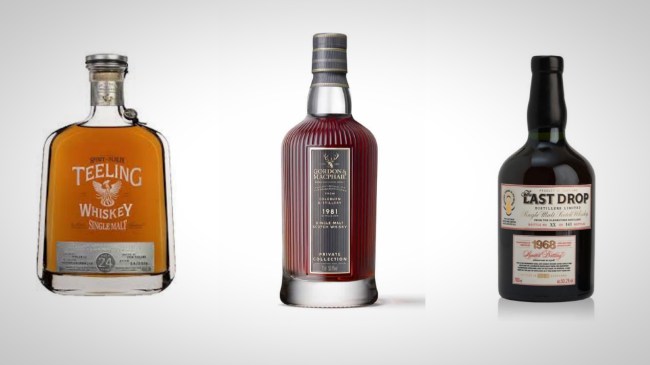 We have some heavy hitters here. First up is the Teeling Whiskey 24-Year-Old Vintage Reserve which was recently named the world’s best single malt. ‘Nuff said? I guess I should mention that it was part of a limited release of only 5,000 bottles and it might cost you an arm and a leg on the secondary market.

If you can find a bottle of the Gordon Macphail Private Collection 1981 Coleburn, buy it. Well, buy it if you can afford it. This ‘rare’ 38-year-old whiskey is the 21st release from Gordon & MacPhail and it was just released in March 2019. Bottles retail for ~$1,500 but it’s nearly impossible to find these days so you’ll have to fight for one on the secondary market.

The Glenrothes ‘Last Drop 1969’ is worth every penny of the $5,890 MSRP if you can believe that. This Speyside comes from two cask bottlings that were filled in October 1969. The first cask yielded only 130 bottles and the second cask filled 141 bottles so there isn’t a lot of this one to go around. 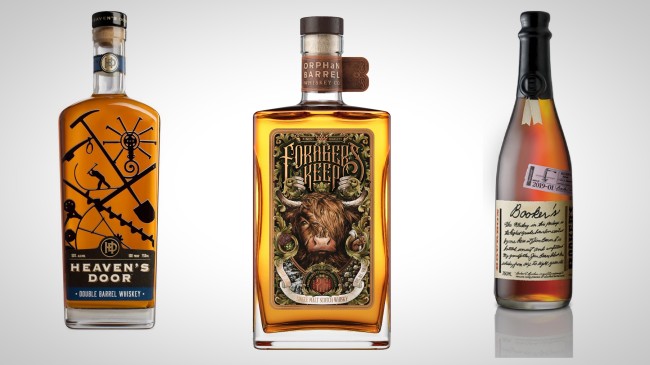 Moving onto the Bourbons and Single Malts, we’ve got six but we’ll start with the three above. First up is the Heaven’s Door Double Barrel Whiskey which is a unique blend of three whiskeys. Fun fact about this distillery, Bob Dylan is a partner in it. This 100-proof Bourbon was awarded 93-points and won ‘Double Gold’ at the San Francisco Spirits Competition.

Next is the Orphan Barrel Whiskey Co. Forager’s Keep and I know this is under the ‘Bourbon’ section but it’s actually a Single Malt that I wanted to make sure you guys didn’t miss. This is 26-years matured and rescued from the Speyside Pittyvaich distillery which shuttered its doors in 1993 due to restructuring. Forager’s Keep is the first single malt release from Orphan Barrel and it blew me away.

Third, is Booker’s “Teresa’s Batch”. I couldn’t put together a list of the best whiskey on the planet without including Bookers. Their annual ‘batch’ releases are the highlights of my year and Teresa’s Batch has been divine. It has a dark amber color and carries flavor notes of vanilla, nuts, and oak. 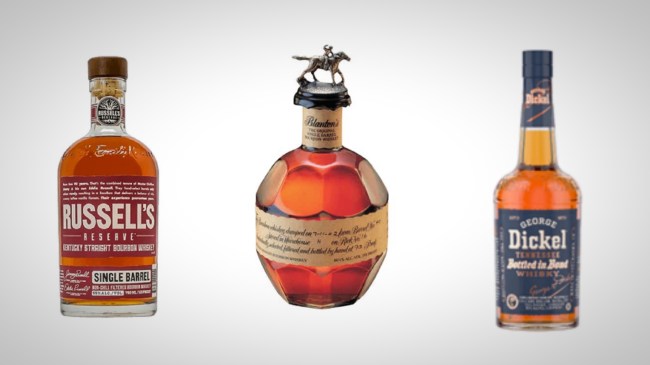 First up here we see the Russell’s Reserve Single Barrel Bourbon, an expression that was awarded a score of 95 points from Distiller. It is matured in No. 4 “alligator” char American White Oak barrels and has rich notes of vanilla and toffee.

Blanton’s Single Barrel is an expression that was once reserved for visiting dignitaries and it has remained one of the finest bourbons on the planet for generations. The third is the George Dickel ‘Bottled in Bond’, a newer release from that distillery. This 100-proof spirit is affordable ($36). It is a 13-year-old whiskey with an impressive 95 out of 100 score and it was a named a ‘best buy’ by Wine Enthusiast. 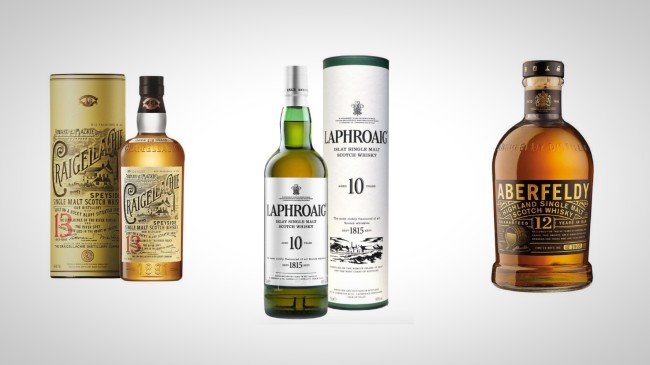 The Craigellachie is in the heart of Speyside and this expression embodies everything I love about that region’s offerings. The 13-year-old is matured in a mixture of Bourbon and Sherry casks which helps build the full aromatic character and a nose of toffee and fudge.

The Laphroaig 10-year-old is a bottle I tell everyone to purchase. I always keep one on the shelf because to me, Laphroaig is the perfect embodiment of single malt. If that sounds over-the-top it’s because I’ve fallen in love with this spirit throughout the years after constantly being impressed by blind taste tests of this 10-year-old against other single malts.

The Aberfeldy 12-Year-Old is distilled and bottled in the Central Highlands of Scotland. Aberfeldy has won its fair share of gold medals throughout the years and the 12-year-old has notes of honesy, spice, and citrus. 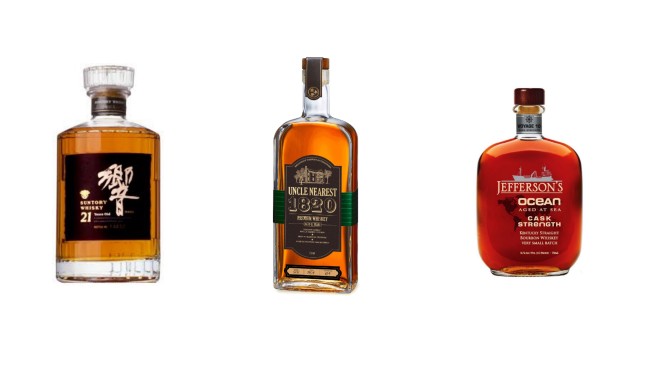 I simply cannot overstate how tasty the Suntory Hibiki 21-Year-Old is. I ordered a glass of this by accident a few months back when I’d intended to order a cheaper pour but pointed at the menu and the bartender started pouring before I could stop him. This has previously been named the best-blended whiskey in the world and if you find this on a shelf it’s as good today (if not better) than it was when it was released.

The Uncle Nearest 1856 was named the World’s Best Tennessee Whiskey at the World Whiskies Awards and that was enough to get my attention. It has tasting notes of maple and florals, on the nose you’ll find hints of apricot, caramel corn, peach, and maple. I’ve had quite a bit of experience with this third bottle, the Jefferson’s Ocean Cask Strength which is aged at sea and crosses the equator 4 times and visits 5 continents before it’s bottled. 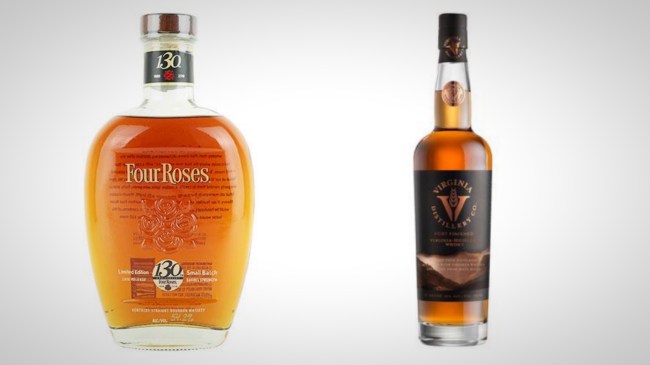 The Port Cask Finished Virginia-Highland Whisky from Virginia Distillery is such a treasure. You’ll find notes of dried fruit and raisins on the nose which blend into vanilla and toffee on the tongue. This award-winning bottle is a must-have for your home bar.

Next, we see the Four Roses 130th Anniversary Limited Edition Small Batch. Unfortunately, I’ve yet to sample this one myself but all of the bourbon lovers who I trust for recommendations tell me this is one bottle I simply cannot pass by. Next time I see it on a shelf, it’s mine. It is a blend of four Bourbons and has s complex nose of vanilla, raisins, pine, and the palate is overflowing with flavors like fried dough, fruit, and allspice.

That wraps up my coverage of the best Whiskey out there right now but if you want to take a step back and look at the Best Single Malt of 2018 and pick up one of those bottles then click that link and thank me later!