BroBible may earn a commission if you buy a product or service via links in this article.
by Thomas AnthonyApril 25, 2022 10:11 am 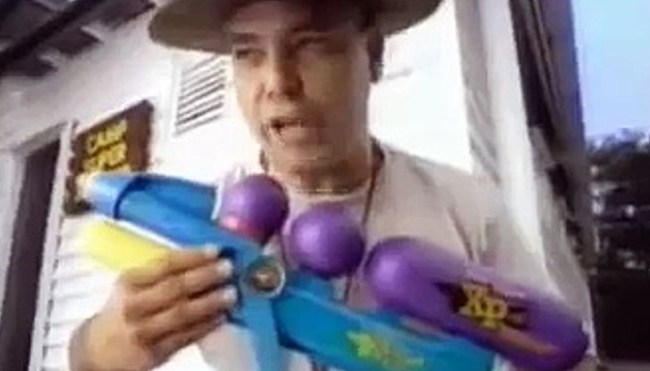 Most people who came of age in the 1990s look back at the decade as a simpler time, and while there may be some objective truth to that perception, it probably has more to do with the fact that the most stressful thing most of us had to endure during that decade was telling your parents you got a C on a math test.

The fact that the period was also the dawn of the internet age means it also marked the end of an era when it came to the ways kids entertained themselves. Sure, there were plenty of screens to be glued to, but they usually came in the form of televisions filled with commercials for the awesome toys that defined a lot of people’s childhoods.

So, let’s take a walk down memory lane and take a look back at the best of the best.

The ’90s were the best time for boys and kids in general thanks to the amazing video gaming systems that were released every single year throughout the decade. It started when Nintendo released the Gameboy in April of 1989 in Japan followed quickly in the United States a few months later. The sales were good (not great) until the ’90s when games like the Pokemon series (Red and Blue, Gold and Silver, and Yellow), Kirby’s Dream Land, The Legend of Zelda: Link’s Awakening, and Super Mario Land 2: 6 Golden Coins.

For some reason or another, the ’90s was a great time for the simplest of toys. Spin Fighters were as simple as it gets. Just take your spinner, charge it up, click a button, and watch as it spins in a bowl, knocking around your opponent’s spinner until a winner emerges.

The coolest feature was the designs on the spinners. That is what really changed the game for this product. It became something every bro wanted to own and show off to their friends.

Nickelodeon made some of the greatest toys in the ’90s and they all had awesome names like Floam, Smud, and Sqand.

However, it was Gak that started it all and it was nothing more than a canister of slime similar to the stuff used on one of the network’s most popular shows, Double Dare.

How is it that kids were allowed to play with something like this without having to worry about lawsuits or injuries? Maybe it is because back in the 1990s, we were more about having fun and enjoying our lives rather than suing a company because a kid hurt themselves using one of their products.

Beast Wars: Transformers was more than just another popular TV show: it was a line of toys that changed the way boys played with action figures.

The action figures that came out before Beast Wars were labeled as “poseable” but these were fully poseable in ways people never imagined. It was a truly amazing toy that we all played with without even knowing how incredible of a product it was back in the ’90s.

The success of Teenage Mutant Ninja Turtles proved that almost any animal, on land or in water, could be turned into a successful character.

Street Sharks rode the coattails of the Turtles’ popularity, and it worked for a little while until the fad wore off.

Most of the toys on this list were made for younger kids, not so much for the teenagers or young adult age group. The Spawn action figures were probably played with by kids but they never got a chance to read the comics or watch the movie simply because Spawn is for adults only.

Galoob turned a brilliant idea into a massively profitable toy when they combined miniature toys with vehicles like race cars and helicopters.

The entire idea of a Micro Machine was just to give the kids of the ’90s yet another toy they hadn’t heard of yet to play with—and it worked like a charm.

Pigs with rockets on their backs? Yes please! Why don’t they make products like these anymore? This is the epitome of a 90’s toy for boys.

When Macaulay Culkin used the Talkboy during Home Alone 2: Lost in New York, it wasn’t even a real thing; it was a useless prop designed for the film long before the technology existed.

Tiger Electronics figured out a way to make one at an affordable cost and released it on the same day the movie was released in 1992 (which just so happened to be on Black Friday).

Little girls loved Troll dolls and the craze took over the ’90s. So Hasbro came up with an idea to market troll dolls to boys by creating a Battle Troll basically mocking the Troll Dolls in the process.

As if Batman wasn’t already the coolest and most badass comic book hero ever, then the first movie came out in 1989 and it got even better. The action figures were so incredibly awesome that it’s still hard to get a hold of an original Batmobile still in the original packaging.

Before the Vortex came along, kids were playing football but not enjoying it because the ball was so large you would have to have a larger hand to be able to throw it correctly.

That all changed with Vortex, as you could throw that thing a mile thanks to the design of the ball and tail.

Just like Micro Machines, Mighty Max was a small, tiny version of an action figure that came with a Doom Zone which was another cool way of giving a kid a way of carrying his Mighty Max figures with him without losing any pieces.

G.I. Joes have been sold in this country since the 1960s and remain one of the greatest action figures ever because of their ability to change with the times—including the treatment they got when the 1990s rolled around.

Once TIGER Handheld games started hitting the market, cross-country trips were no longer boring. So many kids would travel with a large backpack of 15 of these bad boys, losing the battery cover for most in the process.

The invention of Nerf material in use in children’s play toys has revolutionized the entire idea of a safe toy. You can literally make anything you want and if it is made with the nerf title, parents assume it is safe and that’s that.

Why? Because it’s Nerf, not real.

Creepy Crawlers have surprisingly been around since the ’60s but they didn’t become that popular until the ’90s got a hold of it and created a catchy tune to go along with what was basically the boy’s version of an Easy-Bake Oven.

It took a literal rocket scientist to figure out a way to safely construct a toy water gun that had a pressurized cannon to shoot water at a forceful rate. After he figured it out, NASA’s Lonnie Johnson had to wait eight years before he sold his idea to Larami Toys, who eventually were bought out by Hasbro.

At just about every level of school (elementary, middle, and high), boys and young men were obsessed with playing Pogs in the early 90s. It was the most fun you could have because the game was simple: each person put in the same number of Pogs in a stack face-down and then would throw their slammer down trying to flip over as many Pogs as possible. Any Pogs that flipped over were yours,

it was that easy—and so popular that school districts across America started banning this form of “gambling”.

If you played with toys between 1990 and 2000, then you owned a few Teenage Mutant Ninja Turtles toys. They had it all, from a Party Wagon that shot missiles to the Mutant Module that was designed to drill to the center of the earth.

The attention to detail that went into the creation of all these toys caused it to become a massive hit during the ’90s that has stood the test of time.