Did You Know Adidas And Puma Were Founded By Two Brothers Who Were Split Apart By Sibling Rivalry? 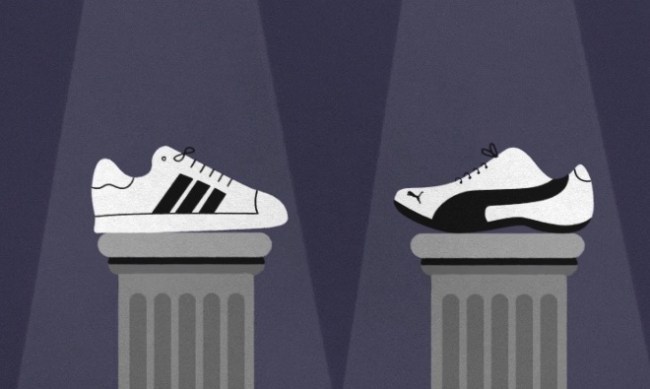 Adidas and Puma are two of the largest athletic, streetwear, and sneaker manufacturers on the planet and it’s no coincidence that the two multi-national companies inhabit the same retail market. Until this morning, I had no idea that Adidas and Puma were founded by two brothers who previously ran a family-owned business in Germany that fractured into two companies fueled by sibling rivalry.

Dating back to the 1930s, the Dassler Brothers Shoe Company in Bavaria, Germany manufactured some of the best athletic shoes on the planet. Their business began to explode when Olympian Jesse Owens won 4 Gold Medals at the 1936 Olympics wearing a pair of Dassler Brothers sneakers. But that’s when things began to change. The two founding brothers, Adolf and Rudolph Dassler, began a bitter feud that was fueled by their success. After World War II, the brother shut down the company and started their own business. Adolf Dassler founded adidas in 1949, a named which stems from his nickname ‘adi-dassler’. His brother, Rudolph Dassler founded Puma. The sibling rivalry did not end there:

I don’t know enough about hypebeast culture to know whether or not this is a widely-known origin story but I’m the type of person who tends to absorb useless random trivia and I’ve never heard this story until now.

I’ve certainly never heard about this town in Bavaria which has stayed bitterly divided between Adidas and Puma loyalty over the years. But it’s pretty dope that they’re reconciling after decades through a soccer game. That’s a pretty ingenious use of sports to bring together a community.

Big shout out to Great Big Story on YouTube for tracking down this cool story and making a video about it!