#golf clubs
BroBible may earn a commission if you buy a product or service via links in this article.
by J. CammApril 26, 2017
Facebook Twitter Reddit Flipboard 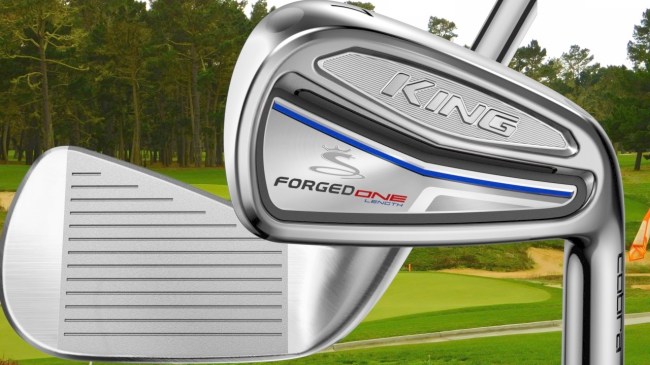 A lot has been made of Bryson DeChambeau and his Cobra KING F7 Forged ONE Length irons. And it’s for good reason, too. The clubs, and DeChambeau, are like nothing else out there. Every single club in DeChambeau’s bag (with the exception of his 3 utility iron, his 3 metal and his driver) are all the same length. More specifically, they are all 37.25 inches long, which is the length of a standard 7-iron.

Somewhere, in some dark, smokey room (or just on Twitter), golf purists are probably denouncing the idea of one-length irons. And those people can make all the arguments they want, but the fact remains is that Bryson DeChambeau has found a lot of success with these clubs. Sure, he hasn’t won on the game’s grandest stage yet and his performance this year has been inconsistent at best, but that doesn’t mean using these clubs isn’t a progressive step for the game of golf. I wanted to find out if it really was.

The idea behind one-length irons is for a player to have one set-up and to build one, repeatable swing. According to Cobra, playing with one-length irons leads to better short game accuracy, more consistent distance with long irons and tighter shot dispersion.

With all those claims in mind, I contacted Cobra. I wanted to try these irons for myself. I NEEDED to try these irons. To be blatantly honest, the most intriguing part for me was hitting 4-iron that was the length of a 7-iron. I hit a lot of 4-irons off the tee on shorter par 4s, and the idea of hitting a more accurate 4-iron was very enticing to me. Arousing, even.

Cobra sent me a set of the Cobra KING F7 Forged ONE Length irons (they also have more forgiving KING F7 ONE Length Irons and juniors clubs). Since I wanted this to be a true test, they made them with the exact KBS Tour105 stiff shafts I have in my “other” iron set, the same Golf Pride MCC +4 grips and every other spec I required.

When the clubs arrived, I headed directly to the range. And I tell ya, I must have hit a thousand 4-iron shots that day if I hit one. I could not put the damn 4-iron down.

I have also been able to take these out to the course and test them during an actual round. Here are my pros and cons after hitting close to 400 balls with these irons and playing a full round.

What others are saying:
A few days before the clubs arrived, I was curious to see what other people were saying about these irons. So I jumped into the review section on Cobra’s site and the only negative comments were pissed off lefties, because these clubs are only available for right-handed players (and also right-handed juniors). It was quite astounding to see that the majority of the people who purchased them had 100-percent bought into the idea of one-length irons.

In my quest to completely understand how these clubs work I sent a few questions to Tom Olsavsky, VP of R&D at COBRA PUMA Golf.

What are you doing to alter the 60-degree to 8-iron to make them fly normal distances and trajectories? Are you distributing weight differently?

In our testing at Cobra R&D, we have found many players can be more consistent by swinging every club like a 7 iron. This simplifies many things, and allows the player to develop more consistency for the entire iron set in their bag. Since one of the keys to scoring is consistent iron play, we see many players benefit all the way down to the wedges.

Additionally if you have a poor short game, ONE length wedges can be much easier to use, especially since hitting short wedge shots with a taller 7 irons setup and swing, is much more consistent and easier.

From a distance and speed perspective, we know that loft is the most important factor in creating distance. We also know that most players play ‘single length’ wedges in their bags today, they are just 35.5” for most standard sets. And in these ‘single length’ short wedges today, players have yardage gaps as they desire. This indicates that loft is creating these yardage gaps, not the club length.

From an overall physics perspective, we have adjusted the head weights of the King Forged ONE set to make them 7 iron weighting. So this means we add weight to the lower lofted irons and reduce weight in the higher lofted clubs.

So for example, we add ~16 gr to the 5 iron head, but we add it with tungsten in the sole of the head. This lowers the center of gravity and increases the inertia. Both adjustments will make up for the change in length by raising launch angle and increasing ballspeed, so that the ONE length iron performs very similarly to the variable length KING Forged Tour iron.

We do the same to the short irons and wedges, raising the CG and reducing head weight and inertia. This creates a slightly lower ball flight, and less speed. As well, more players don’t swing their high lofted irons at 100% speed, since accuracy is way more critical than absolute distance, so the ONE length higher lofted irons and wedges are very accurate due to a more consistent setup and swing.

From a workability perspective, the KING Forged ONE length irons are just as workable since good players can hit the variety of shots with a 7 iron, and now you have a whole bag of 7 irons. Seems really simple and it is!

Aside from a lot of angry lefties, what has been the biggest criticism from the marketplace so far?

As far as a complaint on the KING Forged ONE irons, the lefties are always there, but we do make LH in our KING F7 ONE irons, so if they don’t mind the slightly larger blade and offset, we encourage golfers to give them a shot.

One of the ‘general’ complaints in the market place is about the ball flights looking different from a traditional set. As I mentioned earlier, we have adjusted the CG to help us, but it’s also part of the conversation we started in the industry.

The simplest message for amateurs when discussing ONE length for the King F7 line, is that we suggested golfers play the ball in 7 iron position for all their shots, mostly in order to keep the message simple for the mid handicap players that KING F7 is designed for.

Playing all the irons in 7 iron ball position is different versus what many good players do today, so this creates some ball flight variations from a traditional set. For good players, if they see this problem, we suggest that they can play the ball in any position in their stance and if they want more trajectory , they can easily play that 5 iron up an inch or so in their stance and they should see a similar trajectory as a variable set.

The only other minor concern has been bunker play with the wedges, which some players have struggled with, because they go back to their old crouched down and bent over bunker swing. The key here is to play it like a 7 iron with a taller setup and swing. You will be amazed how easily the ball comes out. (much easier than normal shorter ‘single length’ wedges play)

Last but not least, external industry sources have tested ONE length irons, (both ours and competitors), and they suggested that ONE length could fit and improve somewhere between 30% (MyGolfSpy.com) and 50% (Golf Magazine) of golfers. Our testing shows similar results.

ONE irons are off to a great start in the market this year, and we truly believe that this concept is extremely viable for many golfers out there today.

For me, these could have been an A+++++ if the shorter irons were regular length. I know that isn’t the purpose of them, but I’m just telling you my truth, bro. Others may not struggle the way I did, but when I look at my standard length PW and I know I need to hit it a certain trajectory to quickly clear a tree or other object, there is a certain confidence that you need. And with the limited testing that I did, I just didn’t have it with these. So yeah, it is going to take me a while to build confidence with the shorter irons. As for the long irons, to say that I have a deep affinity for them would be an understatement.