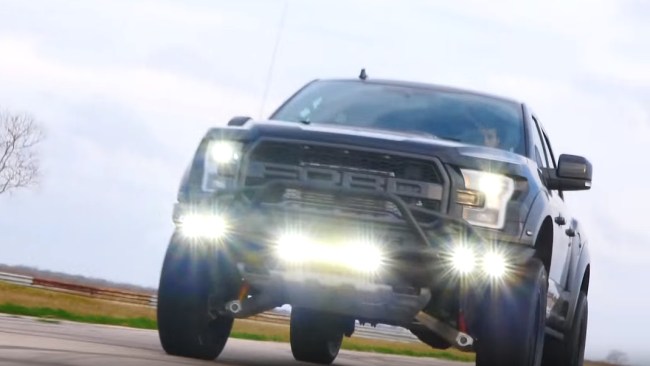 Dwayne ‘The Rock’ Johnson has a net worth of $280 million so he can afford to treat himself to the top-of-the-line luxuries. The Rock’s recent decadent purchase was a beautiful pickup truck. But not just a regular pickup truck, The Fast and the Furious actor purchased a magnificent VelociRaptor V8 that costs $150,000.

The Rock bought (or was given) a 2019 F-150 Raptor, which is no surprise since Johnson gets paid $15 million to be a spokesperson for Ford. But the wrestler-turned-actor wanted a little more from his pickup truck. So he went to the car modifying geniuses over at Hennessey Performance.

RELATED: Dwayne ‘The Rock’ Johnson Explains Why His Dad Is A Complete Badass After Buying Him A Truck For Christmas

Hennessey Performance took the F-150 and equipped the truck with beadlock wheels, all-terrain tires, a matte black bull bar, and auxiliary LED lights in the front bumper. The VelociRaptor V8 has an increased ride height, which will suit the 6’5″ Johnson well. The truck is an eye-catching smurf blue.

Hennessey took the stock EcoBoost V6 and upgraded the engine to a Coyote V8 with a supercharger. The upgraded engine boasts 758 horsepower and the rear wheels flaunt a torque of 449 pound-feet. The Velociraptor has a 0-60 time of 4.1 seconds and races around the quarter in 12.2 seconds at 115 miles per hour. Hennessey Performance will only make 100 VelociRaptor V8’s for the 2019 model. Pricing starts at $147,950 including the original F-150 Raptor.

RELATED: Dwayne ‘The Rock’ Johnson Gets A Tank Named After Him And The Internet Reacts With A Blitz Of Backlash

The Rock is no stranger to custom Ford pickup trucks, he gifted one to his stuntman, who is also his cousin last summer.

SURPRISE! I love handing over keys🔑🎁 I love you brother and enjoy your new truck! Over the course of my career, my stunt double (and cousin) Tanoai Reed @samoanstuntman has broken multiple bones, severed tendons, torn ligaments & just been an overall dominating bad ass achieving several “Stuntman of the Year” honors. All done with one goal in mind – deliver the best movie possible to the world. I had this custom pick up truck delivered just in time to surprise him (he’s still recovering from a stunt injury) while we give what he thought was going to be an interview about our careers together. As you’ll see the moment I put my hands on my hips, that’s the drivers cue to pull away and reveal the big surprise. Not only does Tanoai represent our family and my career with relentless commitment and passion. He also represents an entire Hollywood stunt community that is truly the backbone of our business. Love you uso and thank you for the blood, sweat, tears and years. We’re just getting started. Enjoy your new truck! #LetsRoll 🤟🏾

Some awesome photos that brother @hhgarcia41 took of this amazing and beautiful surprise. Thank you for capturing this 🙏🏽 #blessedbeyondbelief

RELATED: The Rock Surprised His Stunt Double Of 16 Years (Who’s Also His Cousin) With A New Custom Truck

The Rock isn’t the only celebrity getting suped-up pickup trucks from Hennessey. In December, Hennessey Performance delivered a VelociRaptor 6X6 to Post Malone.

Another VelociRaptor 6X6 getting ready for delivery. Thanks @protectivefilmsolutions for the great wrap work!