Honda’s Fastest Lawnmower In The World Reaches 100MPH In 6.285 Seconds And Is Beyond Insane 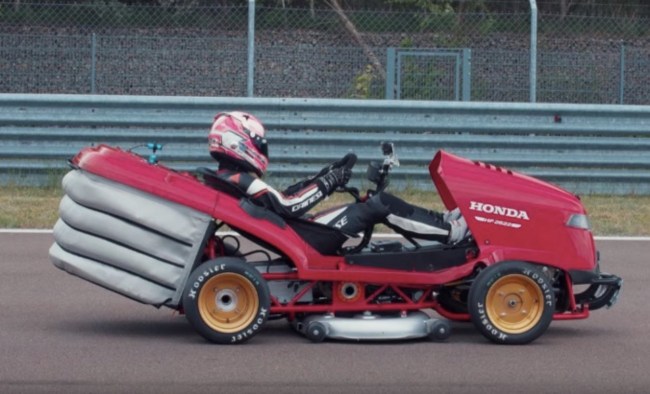 It’s Lawn Moving SZN™ here in the USA. I’m down in Florida where the temperature gauge in my car said it was 99 degrees yesterday and we got 4-inches of rain over the weekend. The grass is growing, my dudes.

Honda understands the importance of Lawn Moving SZN™ here in ‘merica. Dads all across the United States take immense pride in the upkeep of their lawn. Honda wants to be the biggest and the best in the lawnmower game and they’ve taken one giant step forward by releasing the world’s fastest lawnmower, the Honda Mean Mower.

The Honda Mean Mower just broke the Guinness World Record for the world’s fastest lawnmower and it’s honestly comically fast. There’s NO REASON WHATSOEVER that a lawnmower should ever be this fast but here we are.

In order to set the Guinness World Record as the world’s fastest lawnmower, the Mean Mower needed to look like a true lawnmower and it needed to function as one. The Mean Mower goes 0-to-100 MPH in only 6.285 seconds. That’s probably faster than most cars I’ve driven.

The Mean Mower V2 also reaches a back-breaking top speed of 150.99mph which is COMPLETELY INSANITY for a lawnmower. The Mean Mower V2 is powered by a 999cc four-cylinder engine which can also be found in Honda’s CBR1000RR Fireblade SP motorcycle. It pumps out 200bhp at 13,000rpm and has no business being in a badass lawnmower but I’m glad it is.

It wasn’t all that long ago that Honda announced their plans for the Mean Mower lawnmower and ambitions to set a world record for the fastest lawnmower. They actually began this crusade back in 2014 when they launched the Mean Mower V1 which had a top speed of 116.57MPH.

This new engine has taken things to the next level. They’ve added around 35MPH to their top speed and the Mean Mower is going 0-to-100 in under 7 seconds which blows my mind…It also cuts grass. Have I even mentioned that yet, that the Mean Mower V2 is designed to cut grass? Because it is.