#Fastest Lawn Mower
BroBible may earn a commission if you buy a product or service via links in this article.
by Paul SaccaJuly 15, 2018
Facebook Twitter Reddit Flipboard 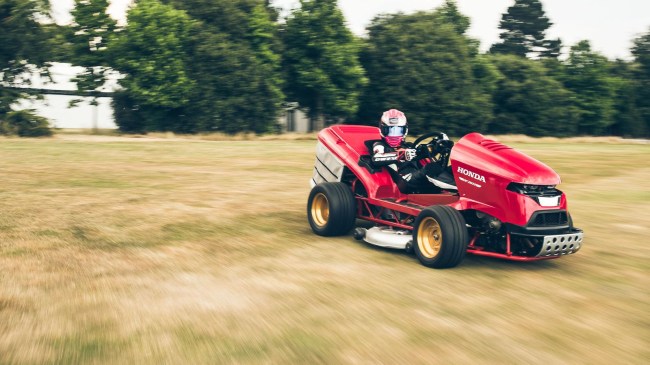 Honda set the land speed record for lawn mowers by creating the Mean Mower that hit a top speed of 116 mph. It turns out that the quest to build the fastest lawn mower is pretty competitive because a year later Honda’s record was broken. In 2015, Norwegian speed enthusiast Per-Kristian Lundefaret built a modified Viking T6 with a Corvette V8 engine that sped 133.57 mph. Honda has returned to reclaim the title of the fastest lawn mower in the world with the Mean Mower V2.

Honda’s U.K. division and Team Dynamics knew the previous mower wouldn’t cut it so they revamped the mean machine. They modified a Honda HF 2622 lawn tractor by transplanting a 999cc four-cylinder engine from a CBR1000RR Fireblade motorcycle into the Mean Mower, almost double the power of the original Mean Mower. The 152-pound engine generates more than 190 horsepower at 13,000 rpm meaning the power-to-weight ratio is close to being 1000 horsepower per 2200 pounds. The Mean Mower V2 can hit top speeds of more than 150 mph. Imagine how excited you’d be to mow the grass with all that power?

The new Honda Civic looks better than ever.

Honda flaunted its Mean Mower V2 at the Goodwood Festival of Speed in England and this is a beastly machine.

The Mean Mower V2 would definitely be the favorite at the Lawn Mower Racing World Championships.