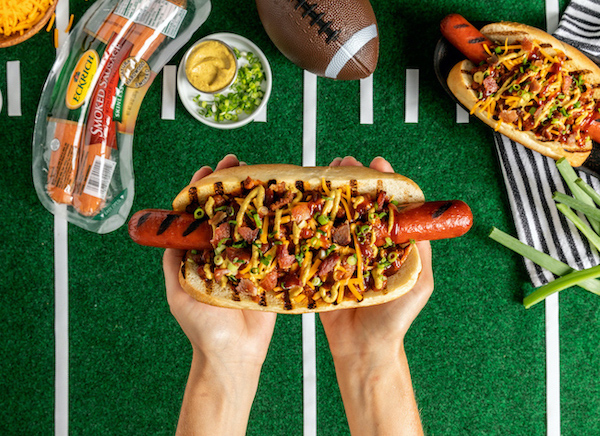 With only a few weeks left until bowl games and the College Football Playoff, the college football season sure has blown by quickly. With your favorite teams trying to cement themselves in the rankings during these final weeks, it also means there are only a few weekends left of tailgating season.

As sad as we are to see tailgating season coming to an end, our spirits remain high as it brings us closer to crowning the first-ever “College Football Playoff National Tailgate Champion” presented by Eckrich. With the opportunity to win a trip to the 2022 College Football Playoff National Championship and a specialty, one-of-a-kind Championship ring, you don’t want to miss out!

Submissions close December 6, 2021, so this is your last chance to show Eckrich why you deserve to be the first-ever National Tailgate Champion. Just take a photo or video of your tailgating or homegating masterpiece. Then post it to Facebook or Instagram with #EckrichTailgate and tag @EckrichMeats.

Entry for the College Football Playoff National Tailgate Champion presented by Eckrich began August 23, 2021. Social media posts must be published by December 6, 2021 to be considered. Voting will begin December 6, 2021 and conclude on December 13, 2021.

To be crowned the first-ever National Tailgate Champion, it’s going to take more than just some frozen patties on the grill and a cooler full of beer. Although that’s certainly a great place to start, Eckrich is scouting out the best of the best, whether it be one-of-a-kind recipes or stunning homegate decor.

As the Official Smoked Sausage and Deli Meat Sponsor of College Football Playoff, Eckrich has partnered with several tailgating + homegating pros to see what unique tailgate spreads they could create using Eckrich meats.

Let’s just say, what they came up with definitely put my beef franks and vegetable platters to shame. So if you’re like me and need some inspiration, here are some examples of how you can take your tailgate or homegate to the next level.

As a wife and mother of two, Lindsay Frank (See Mom Click) knows how important it is to score points with the home team! And by using Eckrich’s Smoked Sausage to make a Grilled Sausage and Veggie Flatbread, she did just that!

Cheesy and easy, that’s right up my alley. So come next tailgate, consider adding it to the menu!

It’s so simple, you can even put your own fun spin on it. Just imagine adding some Eckrich turkey or bacon. Now that’s a meat lover’s dream, no doubt.

Sandy Coughlin, the creator behind Reluctant Entertainer, knows a thing or two when it comes to aesthetically pleasing and mouth-watering food creations. She did start the “epic charcuterie board” and THE BIG BOARD concept back in 2017 after all.

So when Eckrich came looking for a one-of-a-kind recipe, Sandy delivered with Sausage and Onion Brie en Croute atop her tailgate platter!

A post shared by Sandy Coughlin THE BIG BOARD® (@reluctantentertainer)

I seriously need some tips from Sandy on how to get my platters looking that good.

Her amazing tailgate came to life in the back of her sprinter van, and I’ll admit, it’s way cooler than my apartment complex’s grill. So even if making fancy tailgate foods isn’t your thing, take some inspiration from the @ReluctantEntertainer and make a totally unique homegate setup.

Once submissions close on December 6, 2021, be sure to look out for the fan voting period. That’s right—the National Tailgate Champion will be chosen by the people! From December 6-13, you can cast your vote to select your favorite tailgate and homegate arrangements for the grand prize.

Even if you don’t win the grand prize, there’s still a ton of cool stuff you could win: