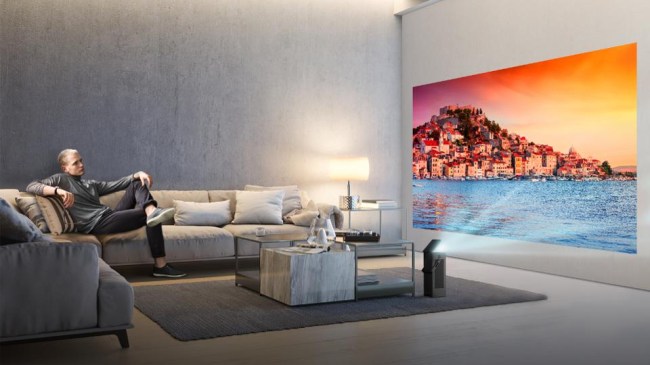 The 2018 CES arrives in Las Vegas this week and despite being days away, we’ve already seen some of the amazing tech that will be unveiled at the event including drink-serving robots, the world’s first 88-inch 8K OLED TV and the Workhorse SureFly personal helicopter. Now we get an early glimpse at LG’s incredible portable 4K HDR projector that can beam a huge 150-inch to nearly everywhere.

LG will unveil their 4K HDR projector at this week’s Consumer Electronics Show in Las Vegas. The South Korea tech giant touts the compact size of their new UHD projector and claims it is roughly half the size of competing 4K projectors on the market as well as being an “affordable yet premium device.” LG boasts that their new projector tops out at 2,500 lumens, which is the company’s brightest projector ever. You can mount the projector on a wall, hung from the ceiling or placed on the floor. The HU80KA projector is powered by a “mirrorless I-shaped engine.”

The projector is equipped with two built-in 7-watt speakers, so you may want to invest in a soundbar. Audio output options include optical, HDMI, and Bluetooth. The projector handles most popular streaming apps out of the box and will also play media from a USB drive. You may also hook up an external keyboard and mouse as well as Ethernet for added connectivity. LG did not reveal a price or brightness and contrast ratios for the HU80KA, but they may offer new details on their exciting new projector during CES 2018.