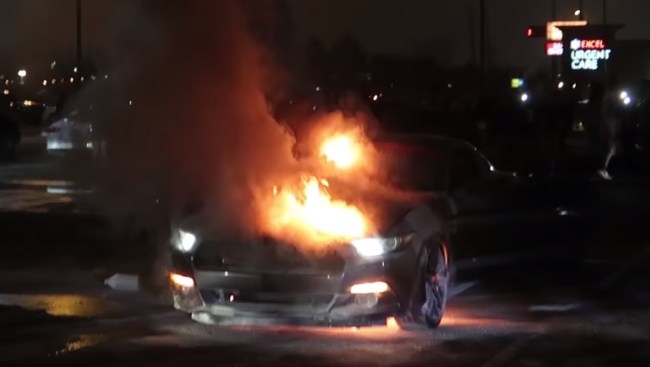 Too many donuts can be hazardous to your health, that also seems to also apply to Ford Mustangs. A video shows a Ford Mustang GT burning down after doing donuts at a car meet.

We take you to Westlake, Texas, where earlier this month there was a car meet at a parking lot. A video posted on the YouTube channel Sinclair Photos shows a Mustang bursting into flames.

Footage shows the Mustang doing donuts with spectators gathered around. Soon after burning rubber, the Stang’s engine started to smoke and then a small glow can be seen underneath the vehicle. Next thing you know, the entire Mustang GT is engulfed in flames.

For some reason, the onlookers thought splashing cups of water would put out the fire. You know water, which is one-third oxygen, the same oxygen that fuels fires. Finally, some people who are more well-versed in science bring over fire extinguishers to try to put out the blaze. Unfortunately for the Mustang and its owner, it was too little too late. The muscle car had burned to a crisp.