#sneakers
BroBible may earn a commission if you buy a product or service via links in this article.
by Paul SaccaJanuary 22, 2018 4:01 pm 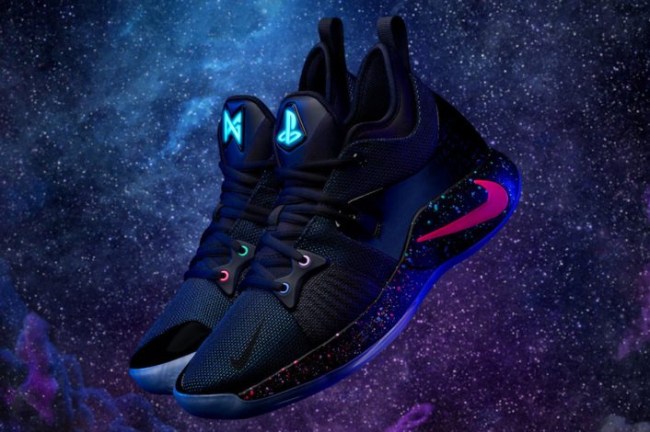 Paul George’s next signature sneaker has a gaming theme and they’re pretty sweet. Nike teamed up with Sony to make a PlayStation-themed sneaker. The PG2 colorway sneakers were designed by the Oklahoma City Thunder star and they even have the PlayStation logo. There is a PlayStation logo and Paul George’s logo on the tongue that lights up to mimic the pulsating blue light that illuminates when the gaming console is turned on. The lights are powered by a non-replaceable battery that lasts for 150 hours.

The colors on George’s second signature shoe are influenced by the buttons on the PlayStation 4 DualShock 4 controller. “We worked directly with the PlayStation team on every aspect of this shoe,” said the shoe’s designer Tony Hardman in a press statement. “One thing that they provided, which was really cool, was the starry graphic from the dynamic theme that will be available for your PlayStation 4 with a code from the shoe. It’s a beautiful graphic, so we made it the sock liner.” The back heel of the left shoe there is a barcode that provides a PSN voucher code, which can be redeemed at the PlayStation Store for a Paul George Dynamic Theme for your PS4.