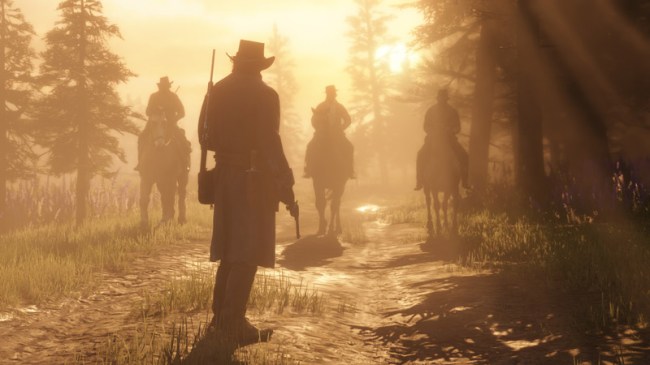 Remember WAY back in October 2016 when Rockstar Games announced they were making the highly anticipated sequel Red Dead Redemption 2?

And remember the cool way Rockstar let the news just trickle out on social media, building the hype as high as they possibly could?

And how they promised Red Dead Redemption 2 was going to be released in the fall of 2017?

Then a map was “leaked.”

They even released a very cool trailer telling us all to pre-order Red Dead Redemption 2 since it was coming out, you guessed it, in the fall of 2017.

Unfortunately, whoops, there were some “slight” delays because, as Rockstar said, they “are firm believers in delivering a game only when it is ready.”

Oh yeah, then they released ANOTHER trailer… with a professed release date of Spring 2018.

Yeah, well… forget ALL of that.

NOW, Red Dead Redemption 2 is OFFICIALLY going to be released on October 26, 2018. For realsies, this time!

Rockstar Games even wrote a sweet letter on their website.

We are excited to announce that Red Dead Redemption 2 will be released on October 26th 2018. We apologize to everyone disappointed by this delay. While we had hoped to have the game out sooner, we require a little extra time for polish.

We sincerely thank you for your patience and hope that when you get to play the game, you will agree the wait will have been worth it. In the meantime, please check out these screenshots from the game. We look forward to sharing a lot more information with you in the coming weeks.

With thanks,
Rockstar Games

You can pre-order Red Dead Redemption 2 below… if you dare. (That or you can just play the updated “Game of the Year Edition” of the original, since, you know, it actually exists and is still very fun.)