Apple has had a tremendous launch of their new iPhone X and it is currently sold out in 20 major cities. But not everyone is welcoming Apple’s $999 flagship phone with open arms. Samsung dropped a new ad that ruthlessly mocks 10 years of Apple iPhones, including the brand new iPhone X.

Samsung’s new commercial titled “Growing Up” features a lifelong Apple fan who has had iPhones since the very first model back in 2007. Throughout the years he has braved the elements to stand in lines outside of Apple stores to get the latest model iPhone. Samsung highlights some of the shortcomings and disappointments of iPhones over the past decade including insufficient storage, small screens, lack of a stylus, non-waterproof phones, phones that don’t feature wireless charging, and the dongle. Eventually, the iPhone fanboy switches to the Samsung Galaxy Note 8.

But Samsung wasn’t done trolling. In the final scene of the advertisement, the new Samsung customer walks past a line at an Apple Store. There you see another man in line waiting for the coveted iPhone X. Check out his haircut. 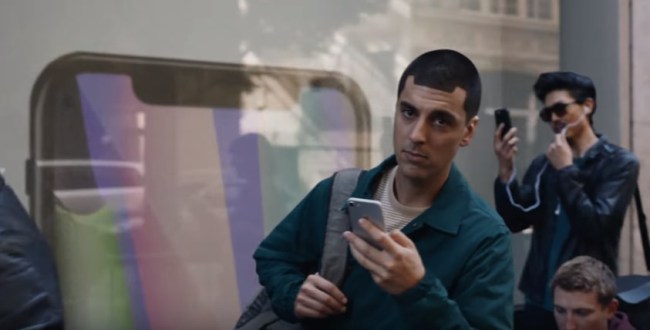 The gentleman in the line has a top-notch haircut. His receding hairline has the same shape as the iPhone X’s infamous notch. Maybe LeBron could be the official spokesperson for the iPhone X? Coincidentally, Samsung probably doesn’t want to make fun of the iPhone X too hard because they are the ones who make the iPhone X’s OLED display, NAND flash, and the DRAM chips.