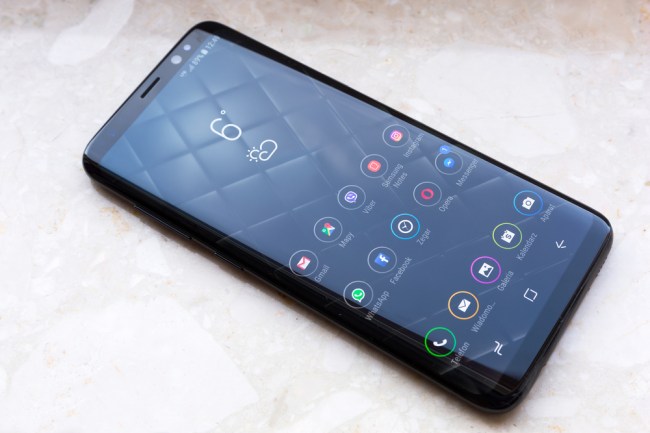 The Samsung Galaxy S9 was missing during the Consumer Electronics Show (CES) last week, but it will be front and center at the Mobile World Congress in late February. Then Samsung’s flagship smartphone will release only weeks later in mid-March. A leak has provided not only the release date of the Samsung Galaxy S9 and S9+, but also some crucial specs of the highly-anticipated handset.

A supposed leak which is said to feature the retail box of the upcoming Galaxy S9 hit the internet last week. The box reveals some impressive specifications of the upcoming flagship handset including an f/2.4 aperture for extra-wide photos, an industry-leading f/1.5 aperture for fantastic photos in low-light situations, new “Super Speed” Dual Pixel 12MP OIS camera, Super Slow-mo video recording capabilities, IP68 water and dust resistance, iris recognition, 64GB internal storage, wireless charging, and an 8MP front camera. The Samsung Galaxy S9 will keep their headphone jack for the S9 and Samsung will include AKG earphones in the box.

The S9 will most likely have 4GB of RAM and 64GB of storage standard. The S9 is expected to have a 5.8-inch screen and the S9+ is 6.2-inches, both will be edge-to-edge Super AMOLED Infinity displays with a 2960 x 1440-pixel resolution on both phones. The S9 will be faster thanks to Qualcomm’s Snapdragon 845 chip, which will also provide 30 percent better power efficiency. The Galaxy S9 and S9+ will be first showcased at Mobile World Congress, which begins on February 26. Then the new phones will be available for pre-order on March 1st, and will have a release date of March 16. Check out what the S9 might look like HERE.

According to a C-level executive at a major casemaker, the go-to-market schedule for Galaxy S9 / S9+ is as follows: