Some Maniacs Mounted A Vulcan Cannon From A F-16 On To A Toyota Prius, See It In All It’s Brrrt Glory 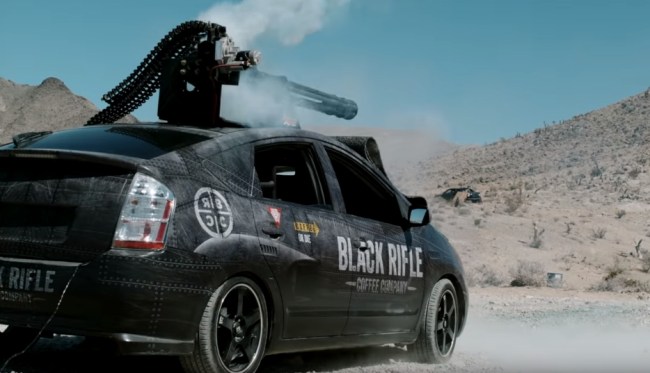 The M61 Vulcan rotary cannon is a six-barrel, air-cooled, electrically fired Gatling-style gun that fires 20 mm rounds at approximately 6,600 rounds per minute. This extremely lethal weapon is usually installed on fighter jets such as F-14 Tomcats, F-15 Eagles, F-16 Fighting Falcons, F/A-18 Hornets, and F-22 Raptors. Despite this being a weapon of war usually designated to jet fighters, it didn’t stop some maniacs from installing an M61 Vulcan rotary cannon on a Toyota Prius. Yes really, a Toyota Prius.

The fine folks over at Black Rifle Coffee Company are a premium small-batch coffee company that is owned and created by military veterans. They also like guns. A lot. They adore guns so much that they mounted a Vulcan cannon on a Prius. For the glorious Frankenstein experiment, Black Rifle Coffee teamed up with weapons restoration experts Hamilton & Sons and Battlefield Vegas, which you may remember from a few years back when they offered an insane $1,000 gun range package where you can fire off rounds in some absolutely incredible weapons.

The BRCC purchased a beat-up Prius off of Craigslist for $2,000 and picked up a 20mm Vulcan rotary cannon from an F-16. After about 160 man-hours over six months of gutting the Prius and installing a roll cage in the electric car to support the heavy gun, they were able to mount the Vulcan. They even had the approval of the Bureau of Alcohol, Tobacco, Firearms, and Explosives (ATF).

While the Prius is cost-effective the Vulcan is not so much since it costs an astounding $27-per-round. With the preposterous firing rate of 6,600 rounds per minute, that means you can spend around $180,000 in ammo in only 60 seconds. The beautiful part about a Prius with a Vulcan rotary cannon mounted on it is that you can quietly sneak up on your enemies and then… BRRRRRRRRRRRRRRRRRRRRRT!

20MM Vulcan on top of a Prius

Here is the M61 Vulcan in action.