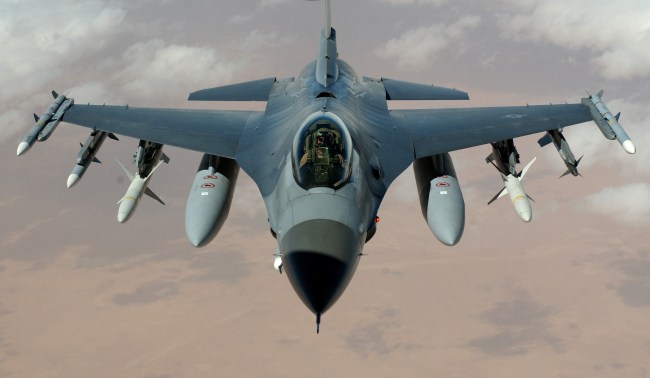 The next time you screw up at your job in such a major way that even Janice in accounting hears about your blunder, think about this mechanic and revel in the truth that your monumental failure pales in comparison to this multi-million f*ck-up.

We take you to the Florennes Air Force Base in Belgium where a mechanic locked up the title for “2018’s Biggest F*ck-Up At Work” when they accidentally blew up an F-16 jet. On October 11th, the technician was performing maintenance on an F-16 and accidentally fired the plane’s M61 Vulcan six-barreled Gatling-style cannon that fires 20mm rounds at 6,000 rounds per minute and completely obliterated another F-16AM aircraft. They’re going to have to reset the “DAYS SINCE LAST ACCIDENT” sign back to ZERO.

A Belgian Air Force F-16 has been destroyed and another aircraft damaged when the M61A1 Vulcan 20mm cannon on board a third F-16 was accidentally fired on the ground by maintenance personnel at Florennes Air Base in the Walloon area of Southern Belgium on Friday, Oct. 12, 2018. pic.twitter.com/uXQdVddTYa

The fighter jet that was obliterated was fueled up and ready to go on a sortie later that afternoon. Instead, the fuel tank exploded and the plane was annihilated. That’s one way to get your first kill. A third F-16AM suffered collateral damage from the explosion. Walking into work the next day after this blunder of epic proportions and pretending that not everyone is staring at you is going to be a smidge awkward.

BELGIUM: An F-16 Bomber Completely Destroyed After An Explosion During Ground Maintenance Work Technician Accidentally Opened Fire From Another Aircraft He Was Working On. 2 Minor Injuries Also Reported But They Were Treated On Spot. pic.twitter.com/xjsWA4Tp9N

Belgium’s Ministry of Defense revealed that two technicians suffered hearing injuries and were treated at the base. “You can’t help thinking of what a disaster this could have been,” said Col. Didier Polome, the base commander. An investigation has been launched by the Belgian Aviation Safety Directorate.

The F-16 fighter plane explodes and another is damaged in Belgium after a mechanic accidentally opened fire https://t.co/bjiSfFsO4m pic.twitter.com/Y3mussNsS3

One second the guy was innocently playing out his best Top Gun fantasies and pretending he is Maverick, the next second he’s blowing up an $18 million aircraft. I don’t know how much airplane mechanics make in Belgium, but I’m guessing they don’t have pocket money to pay for a jet fighter.

That trigger button on the Vulcan cannon was like the shiny, candy-like red button that Stimpy was guarding and couldn’t resist the urge to press.