#interview
BroBible may earn a commission if you buy a product or service via links in this article.
by John ThompsonSeptember 10, 2021 12:18 pm 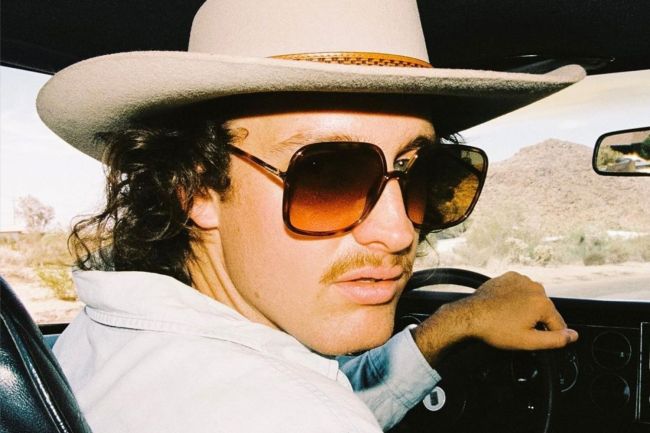 Rockstars are—and have always been—the most fashionable artists. If you think otherwise take a look at how today’s youth gravitates towards the style of rock gods like Hendrix, Bowie, Cobain, Prince, and more.

One rising artist who’s invoking timeless rockstar style is BabyJake. I recently had a phone conversation with him as he was on his way to rehearsals.

“I like the seventies, eighties, as well as just rock and roll fashion,” BabyJake tells me as he’s driving on one of the Los Angeles freeways. “I think you can tell my sound’s going towards that era naturally, and it’s super important the music and the style matches because everything I’m playing now is all surrounded by the live experience.”

At 24, BabyJake has already spent years in the music industry. The Fort Myers, FL native first started playing live shows in Tampa clubs as a freshman in college. During that time, he was closer to a folk artist. Then he shifted to a more hip-hop, pop-inspired sound before being discovered and signed by Scooter Braun—the mega-agent found BabyJake via his SoundCloud page.

Since then, BabyJake has released a number of new tracks and projects. His song “Cigarettes On Patios” jumped into the Top 40 in 2019. And his newest album, The Sun Wakes Up Earlier Now, just dropped last week on September 3rd.

BabyJake’s current sound of rock and indie-pop isn’t necessarily a pivot in his career but rather a natural progression. Taking inspiration from classic rock bands like The Rolling Stones, he feels his natural self when making music that taps into the raw and powerful nature of marathon recording sessions and playing with a live band.

“I’m really trying to book out as many shows as I can. I play BottleRock (BottleRock Napa Valley music festival) on the 3rd. Then I got to New York and play Baby’s All Right. And then I come back to LA and play Moroccan lounge on the 15th, which is a spot I’ve wanted to play for a long time.” 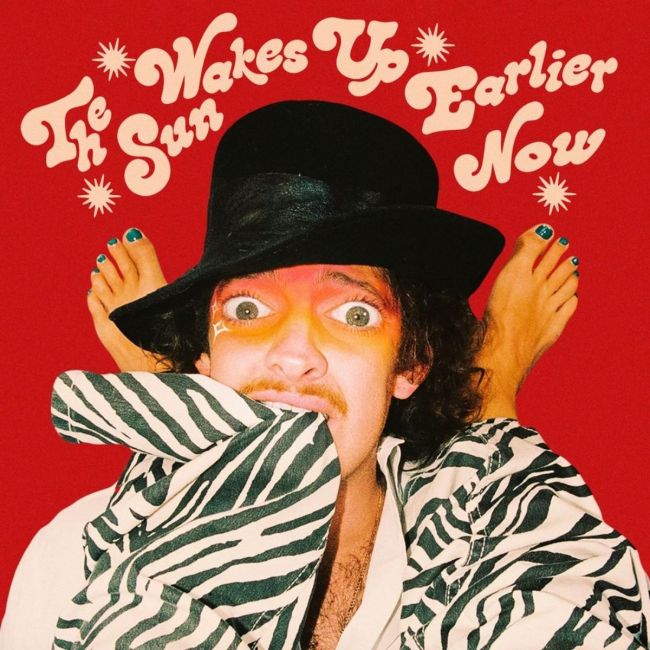 “I think the album is going to translate really well live. It’s not going to be me alone singing over an instrumental. We’re going to try and make things as rock and roll as possible. There’s going to be amps mic’d up, and we’re going to have a bass player, guitar player, and a drummer up there with me.

BabyJake On His Personal Style

One of BabyJake’s most unique qualities as an artist is his personal style. He tells me that he just left a fitting, “My friend is making me like a custom crochet seventies-type suit for BottleRock that’s going to look really awesome.”

Style is just as important to the live show experience as the music. Cobain had the hair. Hendrix had the headband. Prince had purple. And Bowie had power suits.

BabyJake might not have a signature style piece to him yet, but his outfits have a certain aura about them. With vintage Cowboy hats, flowy patterned button-downs, and boot-cut jeans, he’s perfected the look of psychedelic cowboy meets Mick Jagger.

I was curious as to how he came into the style he owns now. 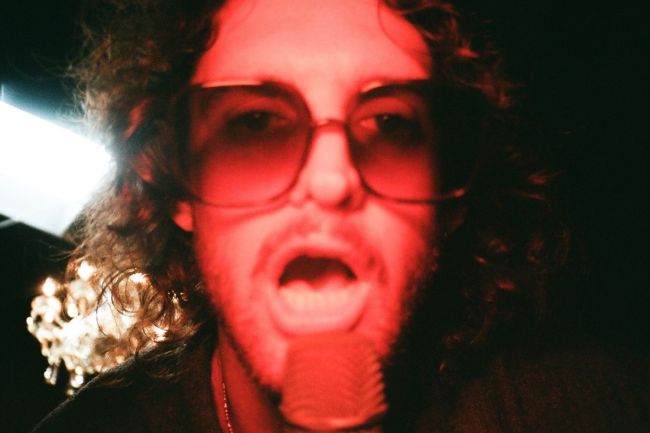 “I have to give a shoutout to the stylist Storm Pablo, he styles Bad Bunny now and has styled Baby Keem. I first met him in LA, we became friends and he started styling me. I remember he was showing me Needles pants and Bodega tops and I was like, ‘I don’t really want to wear streetwear, I want to wear collared shirts and denim jeans.'”

“The majority of what I buy now is resale.”

He continues, “There was never a time where I didn’t know how to dress myself that way, but Storm really showed me how to find upscale pieces I could wear for shoots and videos. Once I learned how to source them, I started figuring out how to create those looks on a smaller budget, that way I’m not paying $300 for a single piece of clothing. The majority of what I buy now is resale. I like to go to thrift and resale spots that have more southern and western clothing.”

BabyJake’s progression into his style now reminds me of how we can build our own world around us through dress. By tailoring the way we look, we can influence how we’re perceived by others.

“I was a super shy kid growing up because I didn’t feel like I could fully understand people right, not in a bad way or anything, but it wasn’t something I understood until I started playing sports. When I started making more friends at school—I was probably 12 or 13—I started learning I could listen really well to others. I learned how to pick up on social cues. I became really good at talking to people.”

I ask BabyJake if he’s an extroverted person. 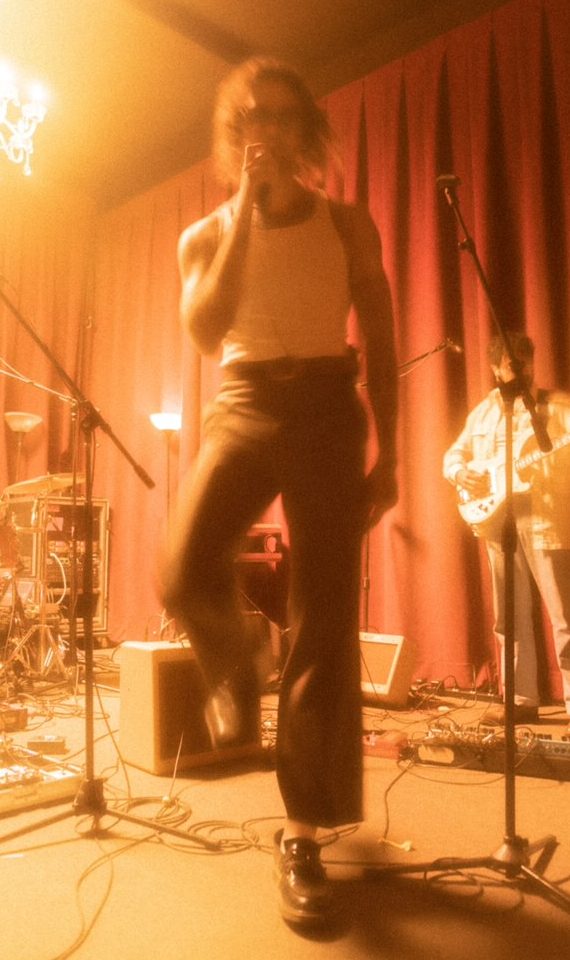 “I might seem as if I’m very extroverted but it’s not really that, it’s more how I can talk with others. I’m six foot five, so people are already looking at me when I walk into a room. And one of the first impressions I can make is through my style, so when I look good and walk into a room at six foot five people will think, ‘This guy has got his shit going on.'”

“…when I look good and walk into a room at six foot five people will think, ‘This guy has got his shit going on.'”

“Look good, feel good, play good. It’s all the same shit. Why did we tape our ankles in high school? Because it looked cool! The same reason for a shooting sleeve too. It looked cool, but it didn’t have any purpose.”

BabyJake grew up playing competitive football and basketball. He still plays basketball about three times a week and someday wants to start his own pick-up league of artists and musicians.

He also reveals to me he’s just signed to a professional modeling agency called Community New York, “I want to lock in a big shoot with brands like Prada, Fendi, Gucci and hop into the fashion world formally while I’m doing music. I really do have an appreciation for upscale fashion and specifically upscale vintage fashion.”

The Makings of An Unexpected Style Icon

Unbeknownst to him, BabyJake might be taking on the role of “style influencer” as he continues to gain wider recognition in the music world.

And with a line of upcoming shows at several iconic venues, listeners will start to spread the word that when BabyJake takes the stage, you’re bound to get a show well worth the price of admission.

You can stream BabyJake’s new album, The Sun Wakes Up Earlier Now, here.