Kramer Almost Had A Different First Name On ‘Seinfeld’ 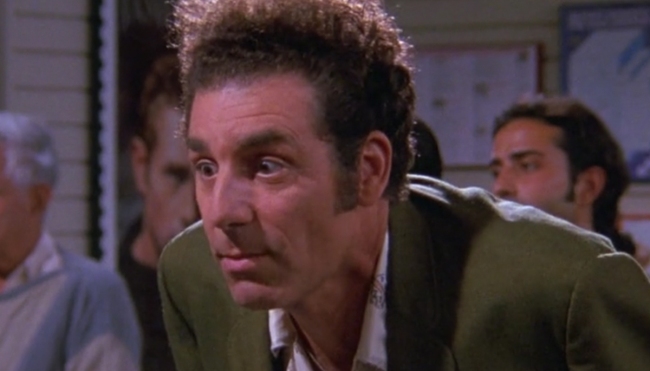 There aren’t many shows in television history that have managed to have the kind of impact Seinfeld did over the course of the 180 episodes that aired in the span of its nine seasons on NBC,

The phrase “pop culture juggernaut” is almost an understatement when it comes to describing Seinfeld‘s legacy. During its initial run, the critically-acclaimed sitcom drew in an average of more than 25 million viewers per episode (75 million tuned in for the finale), and the indelible mark left by what is arguably the defining show of the 1990s can still be felt decades later thanks to the many other programs it influenced and the countless jokes and references that manage to remain surprisingly relevant.

Seinfeld might not seem like a particular subversive show based on what’s come in its wake, but it was built on a foundation of a number of potentially risky creative decisions that ultimately paid off. The “show about nothing” didn’t really feature a  running central plot or put much effort into developing its quartet of main characters—all of whom are largely defined by the annoying and unlikeable personality traits that unite them.

However, Jerry, Elaine, and George seem downright delightful when compared to Kramer, who embodies the antithesis of every quality most people think of when it comes to what you want in an ideal neighbor. With that said, he’s also an incredibly entertaining wild card overflowing with hilarious attributes that made the character a beloved cultural icon—including one at the center of one of the show’s best gags.

Even casual fans of Seinfeld are likely aware “Kramer” is actually the character’s surname; the mystery surrounding his first name was a long-running joke that was finally resolved in season six after Elaine stumbled across an envelope addressed to the man legally known as “Cosmo Kramer.”

It’s hard to think of a more appropriate moniker for a character overflowing with so many random quirks, so you may be surprised to learn he originally received a comparatively mundane name before the writers wisely reconsidered their decision after revisiting the matter.

In an interview with ScreenCrush, Seinfeld scribe Larry Charles and director Tom Cherones said Kramer’s original first name was supposed to be revealed in an episode that was ultimately never made due to some controversial subject matter:

“It was Conrad. Because I was kind of thinking of Conrad Birdie from ‘Bye Bye Birdie.’ So, it was Conrad, actually. And then eventually it became Cosmo.

I remember feeling mixed feelings because I had named him Conrad. Although, Cosmo is a great name. But Conrad was good, too.”

Cosmo seems the funnier of the two, but I’m also not a writer om the most popular sitcom ever.

If you’re curious about the aforementioned controversy, it stemmed from a plot involving Elaine’s decision to purchase a gun, which Julia Louis-Dreyfus refused to shoot (it appears the primary issue was a scene where she pointed the gun to her head and asked, “Where do you want it, Jerry? The Kennedy? Or [holds the gun to her stomach] The McKinley?”).

Cherones and Charles didn’t exactly see eye to eye when asked about that the scraped script:

Larry Charles: “There were no ideas that were off limits.”

Tom Cherones: “You can’t make a funny show about guns, in my opinion.”

Larry Charles: “I don’t agree with that, though. I respect his opinion, but I don’t think there’s anything that’s not funny, necessarily.”

Could the episode have made a statement about gun use or gun control?

Tom Cherones: “Well, I don’t know about that. It was a comedy show. We weren’t trying to make statements.”

Larry Charles: “It’s all a question of how you handle it. From ‘Pulp Fiction,’ ‘Blazing Saddles,’ you can draw from all kinds of sources where guns are used for comedic effect.”