10 Things Men Do That Make Them Feel Like a Man 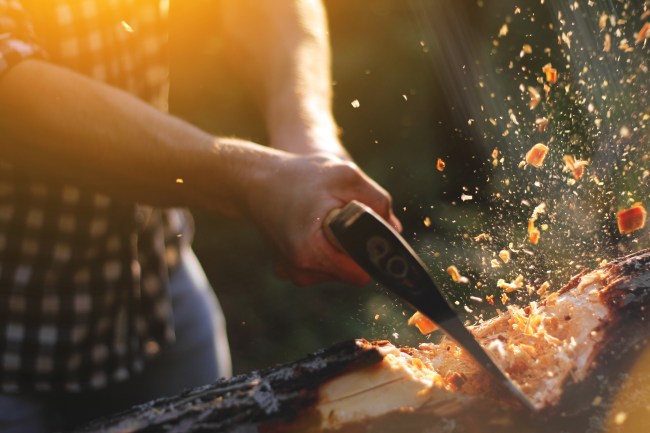 Masculinity can be defined rather simply as a set of qualities, characteristics or roles generally considered typical to a boy or man (thanks for the assist, Webster).

Or in the wise words of Jeff “The Dude” Lebowski: “that and a pair of testicles.”

However, being a man — and feeling like one — is a lot more complex than just one sentence. Those “roles” that our fathers and grandfathers used to inhabit without much thought have changed over time, and I’m not saying it’s for the worse.

What can’t be denied after all these years of human and societal evolution though is that there are certain things that connect directly to feeling like a man.

Listening to the sound of an old Chevrolet engine, finishing of a bottle of top-shelf bottle of whiskey, whipping your dirty face on an already sweat-stained shirt after long day of working outside — these are protected treasures of male identity that are equally as important as pissing upright.

OK, I got a little carried away there — if there’s a clear cut No. 1 for what makes a man feel like a man, it’s definitely take a piss with his feet on the ground. The other way just seems too damn unnatural (more on this a bit later).

Here are 10 other things that make men feel like men:

Guys love being able to blow shit away with as much power as they can possibly wield and a gun is the perfect vehicle for this somewhat psychotic pleasure.

We’ve been doing it on some sort of level ever since we were kids — beating objects with sticks, throwing rocks at glass windows, firing Nerf guns at each other during gay little birthday parties. It was a part of growing up, and now that were here at this crossroads between adulthood and childhood, it’s only natural  — for better or for worse, may I add — that more intense weaponry fills the void.

While gun rights and the obsession over them are inherently American, I do think the need to have power is something that is innately masculine.

Full disclaimer: I could be totally wrong here. Please feel free to bash me as a misogynistic twat in the comments section here, ladies.

While we’re on the theme of violence, we should talk about fists —the most used weapon in the male arsenal. A good fight could make or break a night, which really says a lot about where it should rank on this list (now considering putting it at No. 1).

It’s a true testament to the male psyche that dads don’t even consider getting upset when their sons get into little skirmishes or brawls at school or playing sports — both parties, young man and old man, know that it’s the natural (dare I say moral) thing to do.

You must learn how to stand up and protect yourself at an early age, because it’s something you’ll need to know how to do for the rest of your life. And no, we’re not entering a discussion about bullying here.

I wanted to break this down more specifically, but it would have wound up taking up the whole list. Cars, motorcycles, bikes, helicopters, planes, boats, battleships, tanks — whatever the case may be, men love driving. It goes back to the whole control aspect. And, again, for better or for worse, this is what gives us our release and “inner peace.”

Before we run off to No. 4, let me state again: feel free to burn me to the stake if I’m being a sexist. I’m sure there are some girls who love to drive, but I don’t think there’s the same connection to it within the female identity. Again, I could be totally wrong.

OK, let’s move on before I dig myself an even deeper hole.

Heating up the grill on a Sunday afternoon as the football games come on is one of the top pleasure in the entire world. Besides an emergency situation involving a family member or a friend, there’s probably zero percent chance you can break me, or any man for that matter, from this holy male tradition.

The best part about grilling – and I mean no offense to football or Sundays – is that you can do it any time of the year and still feel that same satisfyingly euphoric intensity pulsating throughout your body. Who doesn’t like to grill on Memorial Day? The Fourth of July? Labor Day? All of those dates come before the football season even begins – it’s truly a great hobby to take up while sitting around in the summer time, or any time of year for that matter. You may need boots, in the winter, but the smell and sound of that juicy steak cooking will warm your heart and fill it with masculine joy.

Similar to everything else on this list, looking at and playing with boobs is something we learn to appreciate at a very young age — and it’s an obsession that never wanes. Even when we become our grandfathers age, we will still love to stare at a good rack. That’s why you can’t deny strip clubs as being one of the top five keys to male identity – and comradery.

In case I don’t touch upon it anywhere else, simple male bondage, like going to strip clubs or Las Vegas, is another thing that makes a man feel like a man. A strip club is always a good time, but making a ruckus with your bros is always part of the enjoyment.

Perhaps more than any of the things on this list, cigars are the most protected manly entity that females haven’t approached – or even thought of approaching. While it’s not uncommon to see a woman manning the grill or driving a sports car, it is very rare you come across a female who enjoys smoking a cigar. (Yes, I realize I’m entering dangerous territory again.)

And, if you do come across one, you might want to chat her up and find out if she’s the one because any chick that can plow through a stogie is worth at least a brief conversation. You may find out that she likes some other things that you consider to be solely masculine like…

You can’t hate a man with an expensive liquor collection – you just can’t. No matter how smug he may come across, there’s this natural need to look over any character flaws and become friends with him. Why? Because he has an acquired and refined taste? No, because he understands the importance of keeping a stocked bar and is willing to share the wealth with you.

How else are you going to drink Patron margaritas and take Blue Label shots? The sad reality is you aren’t because you can’t afford it.

I’m afraid we won’t get to this later so allow me to touch upon it here: being a generous host is a key to being a man (although it can definitely be identified with the opposite gender, too). Anyone who denies their guests alcohol is just an uptight prick. If you’re having people over, you best have the fridge full with good beer and top-shelf liquor. Otherwise, what’s the point?

I told you we’d get back to pissing. A morning piss is definitely the most refreshing part about waking up. Without the six or seven work piss breaks, you wouldn’t be able to get through the day. And as fun as it is to travel, the piss stops after being on the road for a couple of hours are like touching the Holy Grail and getting closer to God.

Oh, and I almost forgot to mention the relief that we feel breaking the seal after three or four cold ones. It’s like having sex without the penetration.

OK, that was an exaggeration. But, yes, urination is that important to masculinity.

However, it can often be overlooked and become mundane in our day to day existence. Therefore what we really take pleasure in – and identify with – is the rare opportunity to piss, or shit, out in nature. I’d love to go back to grad school and study why it is that men love extricating outdoors, but it’ll never happen. I’m content with knowing that I’m a dude and, for whatever reason, when I’m in the woods and I have the urge to take a leak or take a dump I’m always going to consider it a blessed opportunity.

Wow, I’m really impressed we’ve gotten this far without talking about hair at all – when we started, I legitimately thought chest hair could have easily been No. 3 or 4 on this list.

Anyway, growing a thick beard or a solid mustache is really one of the best things a guy can do to make him feel like a man. Yes, you can fuck, lift and eat red meat until the rooster crows, but what really separates men from women is that we’re grizzly savages who fail miserably at basic skills like organization and cleaning up after ourselves.

Facial hair symbolizes this better than anything on the planet.

Yes, children, I know it’s scary to think about.

While most of us are probably not at a point in our lives where we’re ready to think about reproducing, it can’t be denied that males all dream of having sons and teaching them how to play sports. Daughters are nice and all don’t get me wrong, but every guy wants to have at least son to carry on the family legacy.

Again, I’m not trying to look ahead here, but having kids, becoming a dad and taking on the responsibility of being a provider is something that is undoubtedly manly.