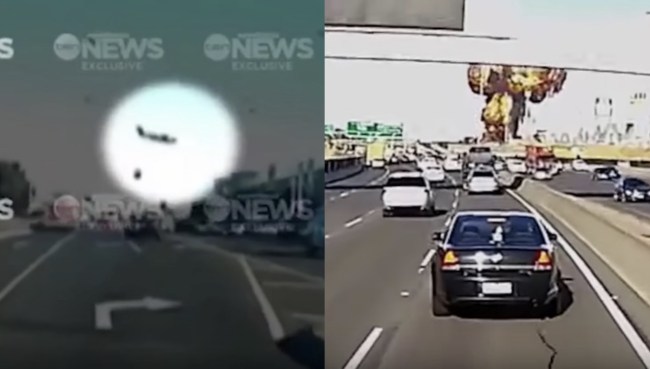 If you haven’t heard by now, there was a deadly plane crash yesterday in Melbourne, Australia which claimed the lives of five people. Shortly after takeoff, the plane is said to have experienced ‘catastrophic engine failure’ which ultimately led to the plane crashing into a shopping mall.

Amongst the passengers who lost their lives in the crash were four Americans from Texas including a former FBI agent, a retired CEO, a law firm co-founder, and a retired Dallas executive all on what CNN described as the ‘trip of a lifetime’.

Today, horrific dashcam footage has emerged from a car driving along a highway leading towards the mall in Melbourne, Australia. This isn’t easy to watch knowing that this plane crash took the lives of four fellow Americans embarking on the bucket list trip they’ve dreamed of their entire lives:

The BBC is reporting that this wasn’t the pilot’s first brush with danger:

Mr Quartermain, an experienced pilot, had just taken off from Melbourne’s small Essendon Airport on Tuesday when he issued two mayday calls.
Moments later, his Beechcraft B200 King Air crashed into a Direct Factory Outlets (DFO) shopping centre, killing himself and his four US passengers. Nobody on the ground was hurt.
Aviation authorities said Mr Quartermain had been investigated over the earlier incident in September 2015.
His plane came within 1.8km (1.1 miles) horizontally and 90m (300ft) vertically of another plane at Mt Hotham, a ski resort in Victoria state, amid bad weather.
The Australian Transport Safety Bureau (ATSB) described it as a “serious incident” in a summary online – which does not name Mr Quartermain – but its final report will not be released until May. via BBC

Awful, everything about this is just awful.

If you want to read about the inspiring lives led by the deceased you can CLICK HERE to head on over to CNN.