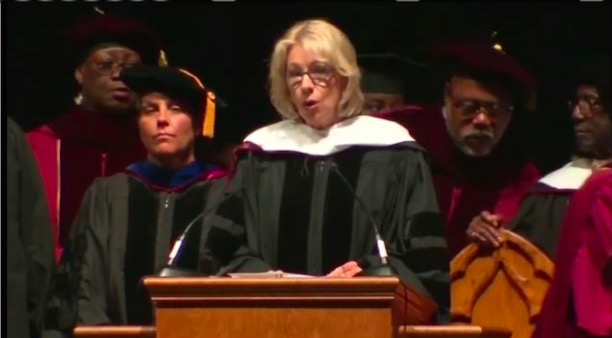 Do you guys remember that sickening photo of the marathon runner who shit his pants in the middle of the race? The iconic photo captures his grimace the moment he realizes he must complete the race, despite sludgy diarrhea running down his legs.

Well, that same scene was reenacted by Education Secretary Betsy DeVos as she gave the keynote address at Bethune-Cookman University’s commencement Wednesday afternoon. She didn’t shit herself, well, that we know of, but she was forced to perform under the most humiliating of circumstances.

DeVos struggled to get a word out over the chorus of 380 graduating students hurling boos in her direction. Half of those students at the historically black college in Florida turned their back on the Trump-appointed Education Secretary as she tried to stress the importance of education. The boos did not stop for the entire 20-minute speech. It got so bad that the university president grabbed the microphone and threatened students that if they didn’t calm down, the ceremony would be canceled. This was unsuccessful.

Most of the vitriol was rooted in DeVos’ recent tone-deaf comments about historically black colleges and universities as the “real pioneers when it comes to school choice. They are living proof that when more options are provided to students, they are afforded greater access and greater quality. Their success has shown that more options help students flourish.” Her critics brought to her attention that HBCU’s were their only choice.

A taste of the room right now pic.twitter.com/jGn3gHuwLM

"Aw, shut the fuck up," someone cries to cheers as DeVos speaks.

Shake it off, Bets. Even Seinfeld bombed his first one.