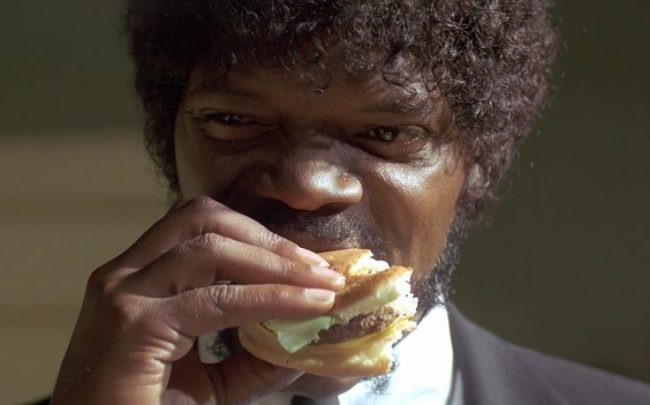 Everybody knows that hamburgers are the cornerstone of any nutritious breakfast—and if you’ve watched Pulp Fiction, you know that Big Kahuna Burgers make a tasty burger.

Not only does Jules Winnfield love Big Kahuna Burgers, but so does Quentin Tarantino, that’s why he included the fictional Hawaiian burger joint in not only Pulp Fiction, but also in Death Proof, Four Rooms, and Reservoir Dogs. But how would one make an actual version of the movie hamburger?

Chef and filmmaker Andrew Rea recreated the Big Kahuna Burger in an episode of his web series Binging with Babish, and also put together a recipe featuring the list of ingredients and the steps to follow if you want to give it a try for yourself.

It looks waaaay more tasty than a Quarter Pounder with cheese (and even a fancy Royale with cheese). Now, all you need is some Red Apple cigarettes and a leather wallet emblazoned with the words “Bad Mother F—ker” and you’ll be working for Marsellus Wallace in no time.