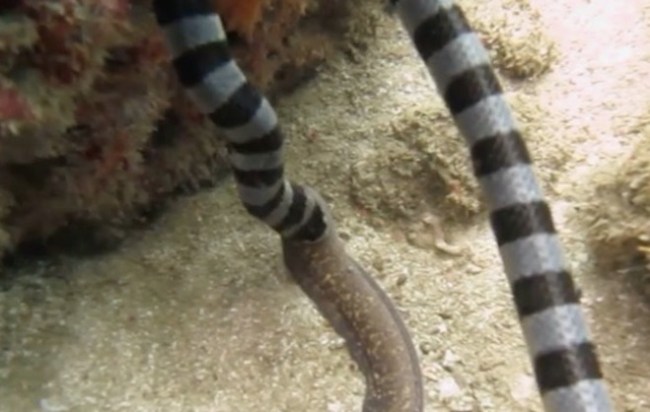 Nature is cruel. Most creatures are born into this world only to be eaten by something bigger on the food chain. What makes this clip so nuts is these aren’t typically two species coming to fisticuffs down on the coral reef.

The Black Banded Sea Snake (or black-banded sea krait) is one of the gnarliest creatures in the ocean because it’s venom is 10 TIMES STRONGER THAN A COBRA SNAKE. So here it is eating a moray eel alive while this SCUBA instructor in Thailand’s Phi Phi Islands films the wild encounter:

After watching this clip I found myself bouncing around on YouTube a little bit, looking for other videos of sea snakes eating moray eels, and there’s really not a ton out there. I found some but they’re few and far between. So this truly is an extraordinarily rare encounter that was filmed in Thailand. They’re extremely fascinating creatures, these sea snakes, and you can read more about them here.

Now, since I mentioned other videos I wouldn’t be doing my job if I didn’t share at least one of those with you:

I want to send a big shout of to my buddy Pieter D. for sending me this video. The person filming the clip above is a friend of a friend of his. It’s friends like him that we rely on here at BroBible on a daily basis to send us a never-ending flow of badass content. Without you tipsters, we wouldn’t be able to bring all this awesome content to the masses.

If you’ve got a video, story, or photographs that you think we should share here at BroBible you can fill out our anonymous ‘TIP OFF’ form by following that link!