5 Buddha Quotes To Get Any Bro Through An Awful Breakup 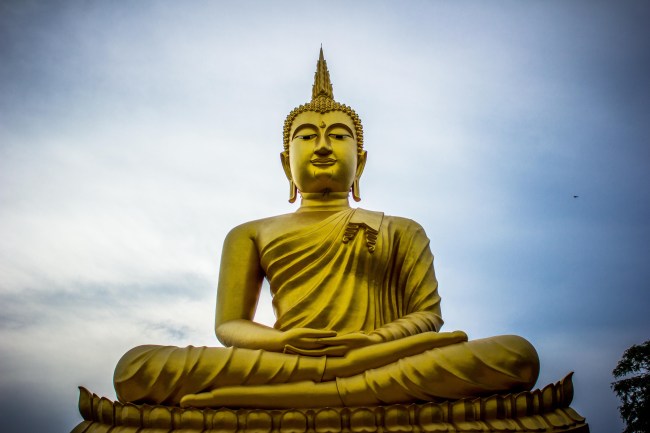 Life sucks sometimes. But for that very reason, some of history’s greatest teachers have been able to turn their scars into stars and report back on how we can do the same.

When he was 29, Buddha, known then as only Prince Siddhartha Gautama, stealthily ventured outside the sheltered walls of his father’s palace and confronted, for the very first time, the harsh realities of life his father tried to keep hidden from him. Outside the palace, Siddhartha witnessed, for the very first time, death and disease; suffering and aging. It didn’t take long for him to realize this: the world was exponentially more fucked up than he ever could have imagined.

Shocked by the shittiness of the world and destined to find a mental antidote, Siddhartha went full spiritual guinea pig on himself and dedicated the next years of his life to trial-and-error meditative practices. Eventually, he picked a tree, sat under it and vowed not to get up until he transcended suffering. After 49 days, he came out of meditation, stretched his legs and linked back up with his old posse. In awe of his new-found swag and pleasantly freaked out by his deep, profound realizations, his old friends (and first students) gave him a new nickname–Buddha, ‘the enlightened one.’

Like young Buddha, after a breakup, you might look back and see the once-nourishing, palatial walls of your previous relationship as an ostentatious, deceitful facade. Sound depressing? On the contrary. It’s precisely the struggle that lead to Buddha’s enlightenment. And now it’s your turn.

So whether you’re powering through a doomsday divorce or the extermination of a two-month Tinder flame, here are five quotes from the the Buddha, with some added commentary, to get you over one kind hump and onto the next kind.

“Holding on to anger is like grasping a hot coal with the intent of throwing it at someone else; you are the one who gets burned.”

On the road to recovery, says Buddha, every attempt to neurotically navigate exactly what went wrong frustratingly leads to an emotional a cul de sac. However, there are less productive things than going nowhere and that’s going backward. By staying angry or bitter, you are making a decision to be miserable for longer. Allow yourself to feel angry, but don’t continually harp on it. The sooner you drop the coal, the quicker the burning will stop.

“A jug fills drop by drop.”

Translation: Time heals all wounds. Yes, even this one.

Remember when you lost 20 pounds a few years ago? How ‘bout when you made a few grand on that IPO? Did that success happen overnight? No. No lasting success happens quickly, and the first few days of progress on anything new are always slow, frustrating and riddled with doubt. While you shouldn’t expect to feel a difference between day two and day ten, comparing weeks two and ten is sure to provide noticeable results. Just be sure not to kick over the bucket by breaking the no contact rule.

“Conquer the angry one by not getting angry; conquer the wicked by goodness.”

Translation: Happiness is the best revenge.

During all your Fireball-infused ex-bashing happy hour soliloquies, remember this advice from the Buddha: there was a time and place in very recent history where you’d have done anything for your ex and vise versa. Don’t forget that in some ways, whether you like it or not, your relationship made you a better, stronger person. Be the bigger human being and honor that. Instead of concocting KGB-esque schemes to make your ex mad or jealous, use that energy where it’s needed most– on keeping you positive, motivated and looking forward.

“Believe nothing, no matter where you read it, or who said it, no matter if I have said it, unless it agrees with your own reason and your own common sense.”

So your former college roommate heard the news, and he’s got just the antidote: A long weekend in Tahiti with a woman named Marijuana and and a baggie full of Molly. Good idea? Maybe in a Judd Apatow movie but not so much in real life. While you’ve eventually got to get back out there, a forced substance-fueled rebound could leave you feeling lower than Marijuana’s self-esteem. Appreciate the support of friends but trust your intuition.

“Pain is certain, suffering is optional.”

Translation: It sucks enough as it is, don’t make it worse.

Chances are, whether you know it or not, you’re doing some optional suffering. By merely carrying around this “why me?” attitude and trying to make pain go away before it is ready to, you add suffering to your pain. Don’t wonder when it will go away, don’t think this will last for ever (pull yourself together) and don’t try to don’t re-play that fight you had at Dan’s barbecue two years ago. Just let it hurt. The pain is here, acknowledge it. Don’t push it away.

Feeling better thanks to Buddha? You should be because you’re already five minutes ahead of where you were five minutes ago, and as you’ve learned, drops of water fill a bucket.