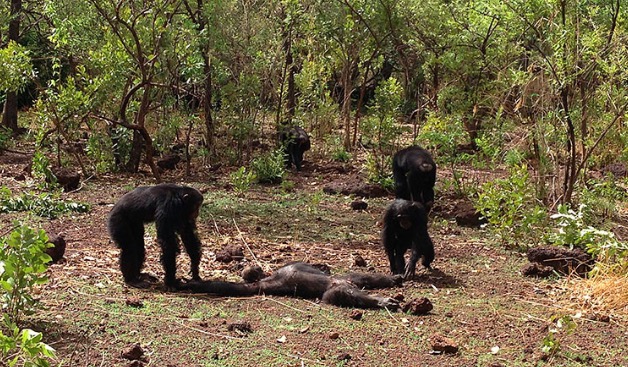 Chimpanzees are some of the most hostile species on their planet with dealing with one another outside of their own tribes. It is extremely common for chimps to fight to the death over territory and potential mates.

What is extremely rare, however, is hostility within their own communities. And what you are about to see is just the ninth recorded case of a chimpanzee killing one of its own.

A new study, published in the International Journal of Primatology, explores the violent killing and cannibalization of a former alpha male chimp who, when his right-hand man suffered an injury, the chimp’s authority was undermined. The former “tyrant” was exiled, but for five years.

Back in 2007, Foudouko was the leader of more than 30 western chimpanzees living in Fongoli, a 10-square-mile patch of savanna in southeastern Senegal.

But a rebellion against his rule banished him to Fongoli’s outskirts—the start of a five-year exile that ended with his death at the hands of his former underlings, a killing perhaps motivated by competition over mates.

Foundouku returned and was eventually accepted back into the fold, but made the fatal mistake of trying to reclaim his alpha rule by trying to mate with a female in the tribe.

That’s when this happened.

Chimps had held him down as others beat him, he was covered in bite marks and scratches and had suffered a wound to his foot and suffered blood loss. The rest of the chimps then “partially cannibalised” the body. Researchers said they witnessed them tearing out his throat and biting his genitals.

University of Minnesota anthropologist Michael Wilson told National Geographic: “Killing enemies is pretty easy to explain, but killing your friends is a puzzle… There’s this really interesting tension between cooperation and conflict.