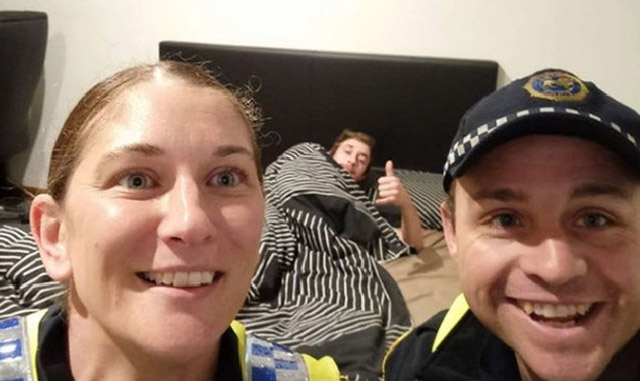 Well, here a new one for you. Have you ever been so drunk that the cops had to take you home? And if so, did they wait there while you got into bed? And even if, somehow, they did that, did they take a selfie with you so you’d know how you got there?!

Because that’s exactly what two police officers in Tasmania did for a gentleman named Reece Park.

Two friendly officers, Constables Natalie Siggins and Jeremy Blyth, escorted the drunk man home and took a selfie so he could remember how he got there.

The selfie included the two officers, with Mr Park, who lives in Launceston, giving a “hang ten” symbol in bed.

On Sunday, the morning after Reece’s big night, he was scrolling through his phone, found the image and posted it to Facebook.

“So was just looking through my phone and turns out these good c—s took some banger selfies after they took my drunk ass home,” Reece wrote. “Bloody legends.”

The police department even re-posted Park’s photo and comments on Facebook.

The police force confirmed on Facebook they were called by a taxi company to help assist a man getting home and “because he was a bit worse for wear, our officers took the opportunity to record the moment with a selfie in the likely event he could not remember how he got home.”

Constable Siggins said officers were called out to assist taxi drivers because “people’s friends have put them in taxis thinking they’re getting home safe but unforuntately they end up like Reece, asleep in the back seat and unable to get themselves all the way home.

She said it was “all part of the service and making sure everyone gets home safe”.

Dang. Talk about going above and beyond the call of duty. Love me some Tasmanian police. Wish everyone, let alone the police, was that nice and helpful.

They even hooked up with him later for a TV appearance.

That’s it. I’m moving to Tasmania.