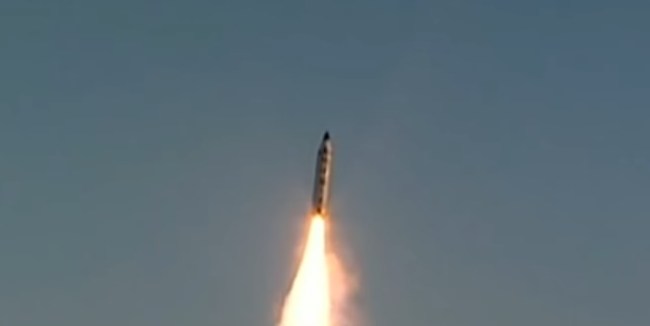 On Sunday, North Korea tried to flex their military muscles by launching a missile after they were warned by the international community not to. But the launch failed spectacularly and the dud “blew up almost immediately.” There are some who believe that the U.S. may have sabotaged that failed launch with a cyber attack.

“It could have failed because the system is not competent enough to make it work, but there is a very strong belief that the US – through cyber methods – has been successful on several occasions in interrupting these sorts of tests and making them fail,” Rifkind said.

“But don’t get too excited by that, they’ve also had quite a lot of successful tests,” he added. “They are an advanced country when it comes to their nuclear weapons program. That still remains a fact – a hard fact.”

The interference utilizes electromagnetic weapons, which are capable of disrupting electronic equipment.

Pyongyang test-launched a medium-range missile, but it exploded four to five seconds into its flight, prompting Associate Professor Matthew Sussex from the Australian National University to believe it was sabotaged.

Sussex told Australia’s 9NEWS that this kind of sabotage would likely need spies inside North Korea.

“We could speculate, for instance, that a defective chip might have been introduced at the build phase, or that the software controlling the launch was compromised. Or both. Or that someone in the program deliberately sabotaged the launch,” Sussex said.

“I reckon we’ll never actually know: one of the things about cyber and espionage is that you don’t want to admit publicly to how much you can actually do, or burn an asset on the inside – given that they’d likely end up dead as a result,” he added.

The failed and humiliating launch came a day after the country celebrated the 105th anniversary of the birth of Kim Jong Un’s grandfather, Kim Il Sung. North Korea held a parade where they flaunted their military arsenal including possible intercontinental ballistic missiles and never-seen-before submarine-launched ballistic missiles.