In Defense Of Cargo Shorts Again, Just Because SOMEONE Needs To Argue With Buzzfeed 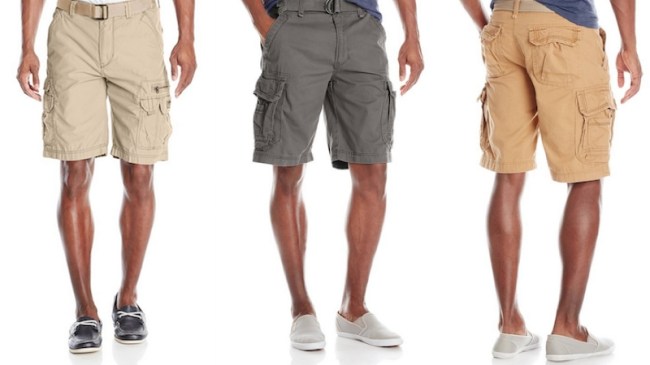 Editor’s Note: Cargo shorts have a negative stigma. There’s no denying it. The battle over cargo shorts has waged in our little corner of the Internet for years. Many BroBible readers dating back to 2009 might remember the commenter wars that would break out over whether cargo shorts were Bro or not Bro in the Brommunity forum (common conclusion of those discussions: Giving a fuck about fashion is not Bro). We’ve had various stances on the issue: A few years ago David wrote a defense of cargo shorts, which TFM responded to with a counter-point. I have personally bashed them and called cargos the defacto uniform of white trash, but generally sides on dudes being comfortable while paying the alimony checks at the end of the day.

Buzzfeed junior staff writer Pablo Valdivia recently published an article calling for men to stop wearing cargo shorts. It’s been all over all of our Facebook feeds the last couple days. So we feel the need to address this piece of viral content with a take of our own. If BroBible can’t keep Buzzfeed honest in the Great Frat Media Cargo Shorts Wars Of 2008 – 2015, who will? So we asked passionate cargo shorts defender Mark Williamson — all-around badass — to respond to Buzzfeed’s dusty, cliched reasons for dudes to stop wearing cargos. Mark’s defense of cargo shorts below. Remember: Our opinions on cargos are diverse here at BroBible, so this opinion isn’t necessarily that of the entire team or of BroBible.com as a whole.  — Brandon

I use the term “article” really loosely because it was basically a bunch of cobbled together Instagram pics with some silly captions. I’m sure the author —  Pablo Valdivia — thought these were oh-so-witty.  Some of these pictures show some bros wearing cargo shorts, while some show hipsters wearing all manner of other attire from cut-off jeans to some of the most hideous garments ever produced by humans. Like this:

Bros, it’s time for us to stand up and put a stop to these asinine attacks against cargos, every older Bro’s go-to summer wear! I’m calling bullshit on all this and throwing down the gauntlet. I am here to set the record straight, once and for all.

Wearing cargo shorts is still definitely cool, just like it has been for decades. Legend has it this fine piece of men’s wear was first developed by a few United States Marines during the Vietnam War. Apparently, these hardcore leathernecks got too damned hot wearing full BDU trousers and so they just hacked the legs off with their K-Bar knives and created the first cargo shorts ever. These early, makeshift cargo shorts made the Marines more comfortable and more mobile while kicking Viet Cong ass!

To those badass Devil Dogs I say “Thanks!” Cargo shorts are the natural evolution from cargo pants, which were first worn by British paratroopers as far back as the late 1930s, and the cargo pockets were provided to allow them to carry more ammunition while they off killing Nazis.

If that’s not badass enough for you, here’s seven more reasons why cargo shorts rock:

I’ll start with the obvious. Cargo shorts allow you to carry… more cargo. Those two big honking pockets can hold a six pack of Corona (in bottles!) and you’ve still got room for your wallet, phone, and car keys. Cargo shorts give you room enough for all those day-to-day necessities a man is supposed to carry, like a pocket knife, extra ammo, and a bottle opener, and still have room to move.   I’ve seen these shorts from “Chubbies” and there’s barely enough room in them for just my junk without random passers-by being able to ascertain my religion with a mere glance at my crotch, much less space for a few essentials.   What am I supposed to do with my stuff if I wear those? Carry a purse?

Survival experts Les Stroud and Cody Lundin have both been spotted wearing these versatile shorts. You want to live in survival situations?  Wear cargo shorts!   In addition to the Marines, some of the most badass soldiers ever to go to battle wore cargo shorts, including the Gurkhas

Men need shorts that they can squat down in, change a tire in, and that gives them room to adjust without putting enough pressure on their innards to cause organ damage. Tight shorts are fine for Hooters waitresses and strippers, but men need room down there. There’s a reason the badass Scots wear kilts.   Unfortunately for us here in America, kilts, even the awesome Utilikilt, which is a hybrid kilt/cargo shorts gift from Great God Almighty, hasn’t got a foothold here yet… yet.   Besides, my girlfriend can’t get frisky and run her hand up the leg of a pair of tight shorts like Chubbies to juggle my cojones while we’re having a few beers in some dark booth at the local dive, can she?

4. They will save you money.

Cargo shorts will save you money because they are made to last. I have a pair of cargo shorts I bought in the 90’s. They were made by the single-most badass clothing company on the planet, Carhartt.   You can get yours right here. I PROMISE that they’re significantly cheaper and last much longer than those silly expensive $60 Chubbies.

5. Some women actually want you to wear them.

Here’s the thing: Women don’t want to compete with you for attention. If you’re strolling along in a pair of tight shorts, you are going to attract attention. It’s going to be one of two kinds of attention.   (1. You’re a Greek god with buns of steel and you are going to get admiring stares from other women and jealous, sneering stares from the pudgy guys like me.   Or, (2. you’re a pudgy guy like me, but one who lacks the wherewithal to camouflage his beer belly and saggy ass with baggy, comfortable cargo shorts. You’re going to look pathetic. Use that dad bod to your advantage, Bros!

6. Think of the boners and swimmers!

Science has proven time and again that men who wear boxer shorts have harder erections and higher sperm count than those who don’t. Guess what you can wear with cargo shorts that you can’t with those other ones?

7. They cover up more of your legs.

Seriously, no one is interested in seeing that much of any man’s legs. That look went out with 1970s tennis pros. Cargo shorts solve this problem by covering most of your thighs. Like they should. You want to show off your gams? Go to the damn beach! The author, proudly wearing his cargo shorts to — you know — do actual manual labor while staying comfortable.  Let’s see you lay a half-acre of turf, lay a patio, and dig out some tree stumps in some of those hipster tight shorts.