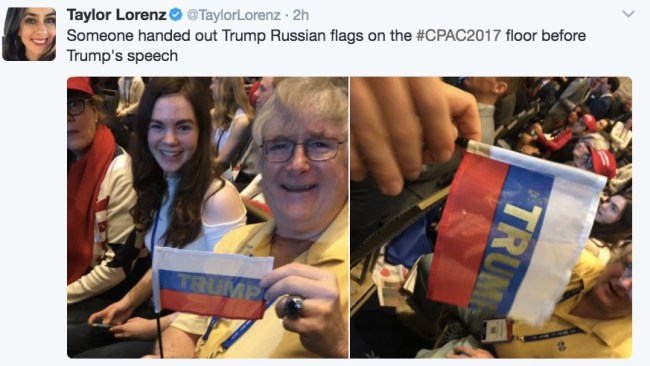 The connections between Vladimir Putin’s Russia and Donald Trump’s White House are too numerous and infuriating to list for one blog post. Even with the resignation of Michael Flynn, the irony of it all is that many of Donald Trump’s most fervent supporters just don’t care and are happy to support a President that asks a foreign super power to “keep hacking” the United States. This obviously comes with some major pushback from the White House:

White House pushes back on CNN report that said it asked the FBI to knock down Russia connection story https://t.co/0t0XjL3n16 pic.twitter.com/GaKdQp9DxW

This morning at the Conservative Political Action Conference in D.C., this ignorance was on full display when members of the crowd started waving Russian flags with a gold “Trump” logo before POTUS spoke to the crowd. They were eventually confiscated.

Ronald Reagan is in his grave.

Crowd at CPAC waving these little pro-Trump flags that look exactly like the Russian flag. Staffers quickly come around to confiscate them. pic.twitter.com/YhPpkwFCNc

Someone handed out Trump Russian flags on the #CPAC2017 floor before Trump's speech pic.twitter.com/uf1ADMt6ZL

Fortunately, CPAC staffers noticed the Russian flags and stepped in to avoid a PR crisis.

UPDATE — Apparently here is the prankster troll that handed out the flags:

Ryan Clayton, @Project_Veritas nemesis gets kicked out of @realDonaldTrump speech at #CPAC for handing out Russian flags. pic.twitter.com/0rLgeqIC3A